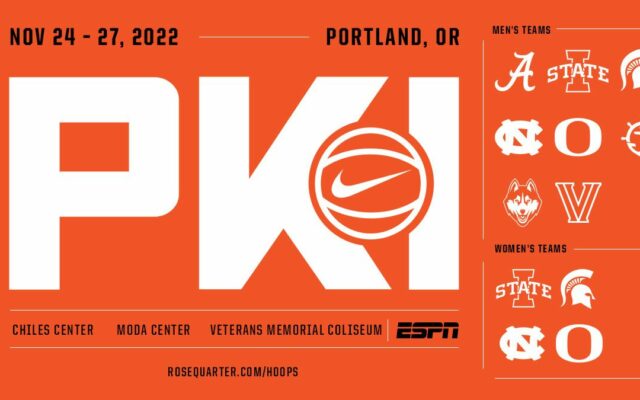 PORTLAND, Ore. – Portland will be the center of the college basketball universe this Thanksgiving.

Rip City Management has announced two tournaments to be played in three Portland venues between November 24th and November 27th.

Moda Center, Veterans Memorial Coliseum, and Chiles Center will be home to the Phil Knight Legacy and Phil Knight Invitation.

Every game will be televised on ESPN.

“We’re proud to be hosting the Phil Knight Legacy in conjunction with ESPN Events’ PKI,” said Chris Oxley, Senior Vice President, Rose Quarter. “Having the best college basketball teams in the world gather in Portland to celebrate Phil Knight’s continued legacy is a great opportunity for our city.”

Here’s more on the tournaments:

The men’s teams in both the Phil Knight Legacy and PKI will play one game per day in the bracket-style format on November 24, 25 and 27.

Brackets and the complete schedule of games will be announced this summer. Ticket information will be available soon. Fans can sign up for pre-sale access at rosequarter.com/hoops.