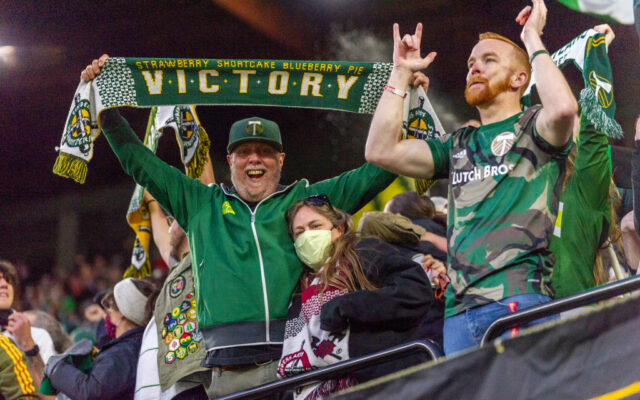 PORTLAND, Ore. (AP) — Felipe Mora and Santiago Moreno scored and the Portland Timbers advanced to the MLS Cup final with a 2-0 victory over Real Salt Lake in the Western Conference final on Saturday.

Fourth-seeded Portland will host the winner of Sunday’s Eastern Conference final between the Philadelphia Union and NYCFC on Saturday. It is the first time that the Timbers have hosted the league championship.

Seventh-seeded Real Salt Lake had appeared in the MLS Cup final three times, winning the title in 2009. It was the team’s fifth trip to the conference finals since joining the league in 2005.

Salt Lake had won all three previous playoff matches against the Timbers, including the last meeting in 2019, when RSL won 2-1 at home in the opening round.

But the Timbers swept Salt Lake in their three meetings during the regular season, outscoring their opponent 12-4 in the three matches.

RSL advanced to the conference final with a 2-1 victory at Sporting Kansas City. The team was undefeated in its previous four straight road matches.

The Timbers downed top-seeded Colorado in the conference semifinals.

Portland went up early with Mora’s goal in the fifth minute. RSL defender Aaron Herrera tried to clear the ball from out in front of the goal, but it fell to Mora, who scored. It was Mora’s 12th goal this year.

The Timbers added an insurance goal in the 61st minute. Moreno’s right-footed blast from atop the penalty area hit the post then caromed off the back of RSL goalkeeper David Ochoa.

The Timbers were without Dairon Asprilla because of a red card in the 2-1 conference semifinal win over the top-seeded Colorado Rapids.

The availability of Portland’s Sebastian Blanco was uncertain because of a hamstring injury against the Rapids, but he was available as a sub. Blanco has seven goals and seven assists this season.

Keeping Blanco out of Saturday’s game gave him more rest before the final.

RSL saw the return of captain Albert Rusnak, who missed the past two games because of the league’s health and safety protocol. Rusnak has 11 goals this season.