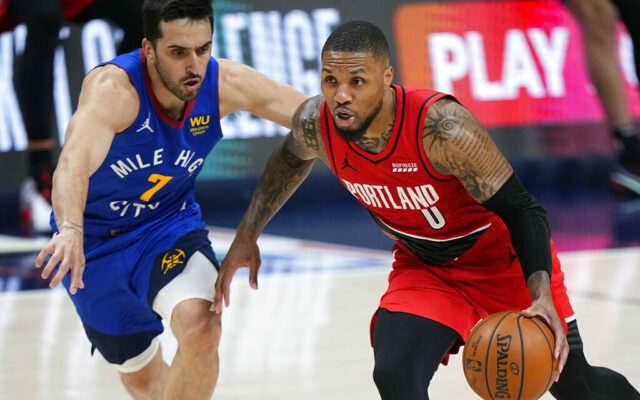 Carmelo Anthony and Anfernee Simons kept the Portland Trail Blazers alive in the first half, but Damian Lillard closed the game for the road team in Denver on Saturday night. Off the bench, Anthony and Simons carried the Blazers in the first quarter, scoring the final 18 points. Portland led 35-30 after the first 12 minutes. Melo had 18, while Simons poured in 14 points throughout the game.

Denver quickly bounced back with a big second quarter and led at halftime, 61-58. CJ McCollum and Lillard shot a combined 8-for-22 in the first half, including Lillard hitting the only two three’s between them; Lillard was 2-of-6, McCollum was 0-for-3. The biggest issue for Portland early was the rebounding discrepancy. The Nuggets outrebounded the Trail Blazers 29-16 in the first half including a 20-12 (defensive) and 9-4 (offensive) rebound margin.

In the second half, Portland was much better on the glass. The teams were even on the defensive glass (17-17), but the Blazers won on the offensive side (6-2) in the final 24 minutes. To start the third, Denver went on a 10-4 run to lead 71-62. Portland outscored the Nuggets 61-38 the rest of the game including 34-15 to end the third quarter. The Blazers win Game 1, 123-109, and now have home-court advantage. Lillard scored 15 points in the third quarter, and he ended up with 34 points and 13 assists overall. The Trail Blazers hit a franchise playoff record 19 three-point shots.

McCollum finished strong with 21 points. Jusuf Nurkić closed the game with a double-double as well, 16 points and 12 rebounds.
It took him awhile to get there, but Norman Powell reached 10 points to give the Blazers six double-digit scorers. Nikola Jokić and Michael Porter Jr. looked great in the first half for Denver. Jokić tied Lillard for the game-high with 34 points, while Porter had 25 points.