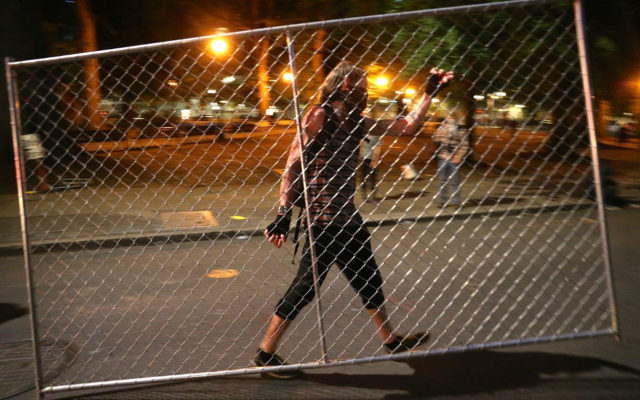 Protesters relocate a fence in front of the Justice Center, Saturday, July 18, 2020, during another night of protests in Portland, Ore. (Mark Graves/The Oregonian via AP)

PORTLAND, Ore. (AP) — Portland police early Monday detailed another night of conflict between protesters and federal forces outside the U.S. courthouse in Oregon’s largest city, including a small fire outside the building and tear gas deployed to disperse the crowd.

A department statement said police officers did not engage with the the crowd, and that federal authorities periodically came of out of the courthouse to keep demonstrators at bay, according to police and news outlets.

“At 1:34 a.m. people lit a fire within the portico in front of the federal courthouse. Others gathered around the fire adding wood and other debris to make it larger. At 1:42 a.m. federal law enforcement came out of the courthouse, dispersed the crowd and extinguished the fire,” the statement said.

Gas was used at least twice to remove protesters, the statement said, but Portland officers “were not present during any of the activity” or deploy any “CS gas.”

The statement comes as some local and state leaders have voiced their displeasure with the presence of federal agents in the city that has seen protests every day since the death of George Floyd in Minneapolis nearly two months ago.

Speaking on CNN’s ‘State of the Union,’ Democratic Mayor Ted Wheeler said federal officers “are not wanted here. We haven’t asked them here. In fact, we want them to leave.”

Top leaders in the U.S. House said Sunday they were “alarmed” by the Trump administration’s tactics against protesters in Portland and other cities, including Washington, D.C. They’ve called on federal inspectors general investigate.

The Democratic lawmakers are seeking an investigation “into the use of federal law enforcement agencies by the Attorney General and the Acting Secretary of Homeland Security to suppress First Amendment protected activities in Washington, D.C., Portland, and other communities across the United States.”

President Donald Trump has decried the demonstrations, and Homeland Security Secretary Chad Wolf blasted the protesters as “lawless anarchists” in a visit to the city last Thursday.

“We are trying to help Portland, not hurt it,” Trump tweeted Sunday. “Their leadership has, for months, lost control of the anarchists and agitators. They are missing in action. We must protect Federal property, AND OUR PEOPLE. These were not merely protesters, these are the real deal!”

Late Saturday, Portland police declared demonstrations near the federal courthouse a riot after saying protesters broke into the Portland Police Association building and started a fire. Dumpster fires were also set and fencing was moved and made into barricades, police said.

Oregon Attorney General Ellen Rosenblum sued Homeland Security and the Marshals Service in federal court late Friday. The complaint said unidentified federal agents have grabbed people off Portland’s streets “without warning or explanation, without a warrant, and without providing any way to determine who is directing this action.”

It’s unclear whether anyone was arrested or detained during the protest Sunday night.