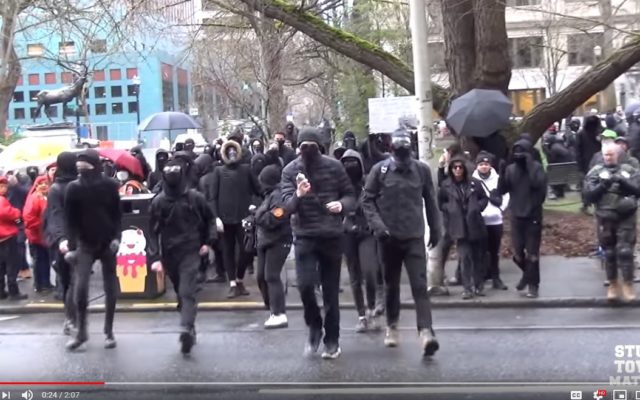 Portland Police are forced to deal with a different breed of protest bystander these days.

I am referring, of course, to the swarms of vloggers, YouTuber’s, and self-described “citizen journalists” who inevitably come out to follow each downtown Portland protest, moment by moment.

Yes, I put “citizen journalists” in air-quotes.  I did.

It’s because, in so many cases, I just can’t take them seriously.  I’ll go ahead and admit it.

Too often, it just looks like these folks are strictly in it for themselves.  They dodge in and near these protest crowds, hoping to obtain some splashy or compelling images.  Some of them get pepper-sprayed or thumped, of course (all the better for their YouTube channel)

Of course, they do.

But then some of them also expect to get full protection from police officers in critical or truly dangerous moments.  It’s a very strange expectation to me and Portland Police tell me, in all honesty, it’s a pretty big ask.

I’ll refer to one specific case for today, but it applies in a lot of cases, I’m quite certain.

It’s the case of Nate Milsap.  He’s been a “fly on the wall” of these protests (and counter-protests) for a long time, posting video and other updates to his “Stump Town Matters” YouTube channel.

Here’s what happened to him Saturday, during the Antifa demonstrations in downtown Portland.

You heard the police officer say it, “we won’t run out and save you..”

One thing is for sure, it would be disconcerting for anyone to hear that sentence come out of a police officer’s mouth.  So I reached out to PPB for more.

“I think he could have stated that differently”, PPB Lt. Tina Jones tells me.  She adds that during such potentially violent street demonstrations, there has to be, “…a degree of ownership for one’s personal safety,” she said.

When I asked, Lt. Jones said she could not give me the names of the officers in the video.  I’ll say I did not demand to obtain the names either.

Lt. Jones says of the small army of vloggers who come out for these protests, “sometimes it actually creates a flash-point that we really would rather not have or have to deal with.”

I asked her if any new policy initiatives might be in the works at PPB to help deal with this issue.  Lt. Jones says she doesn’t know of any.

Until then, she asks that vloggers, “consider doing what you’re trying to do at a (safer) distance.”

For my own part, I would advise any of these vloggers to use your eyes and your memory on more stuff.  You don’t always have to have the camera rolling to get the story.