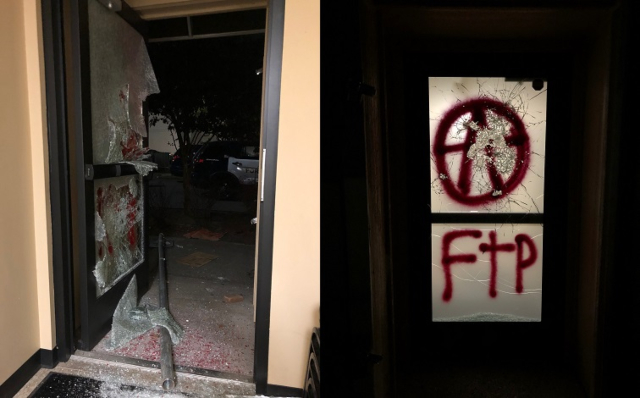 Damage to the Portland Police Association Building on August 5th, 2020

PORTLAND, Ore. — A hostile crowd gathered outside the Portland Police Association headquarters on North Lombard on Tuesday night leading to a riot being declared by Portland Police.

A riot has been declared at N Lombard St and N Campbell Ave. You are ordered to disperse to the south immediately.

A group of several hundred people marched from Peninsula Park around 9:00pm.  They put up a fence and barricades to block traffic on Lombard at Campbell Avenue and set fire in the middle of the road and outside the building.  Others vandalized the Portland Police Association office by spraying graffiti and attempted to pull plywood off the doors and windows.

Shortly after 11:00pm, several people then began to break into the office.  They got inside, lit another fire and caused further damage.  Police arrested three people.

We are aware of people who are in the process of breaking into the back door of the PPA building on North Lombard Street.

To those attempting to break into and/or damage the Portland Police Association building: Stop now or you may be cited, arrested, or subject to use of force.

While securing the building, members of the crowd hit several officers with items including rocks and bricks.  One officer was also hit with an alkaline substance.

Earlier in the evening, police say a pick-up approached a barricade in the road that was put there by protesters.  Someone laid their motorcycle down in front of the truck and the driver sped forward, pushing the motorcycle with sparks flying and plowed through the barricade.  The driver was interviewed by police and released without charges.

Just after midnight, gunshots were fired at a parked car a few blocks away on North Mobile Avenue.  A few minutes later, there was a fight in the parking lot of a convenience store on North Lombard.  Several gunshots were heard as a group scattered.

Portland Police used crowd control munitions to move the crowd which dispersed around 3:30am.