Portland Police Chief Chuck Lovell Reacts To Riot And Arson At Multnomah County Building: Lets Be Known For Being Leaders In Change, Not For Nightly Violence 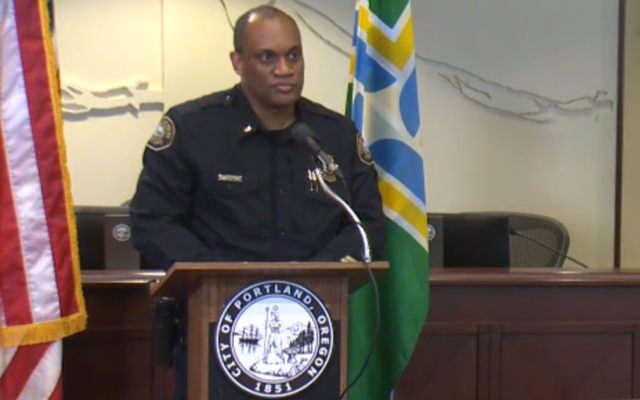 The destruction at the Multnomah Building last night occurred on yet another night of senseless criminal activity in the City of Portland. Breaking windows, using accelerants to ensure a fire catches and damaging property are not solutions, but further demonstrate the intent to engage in anarchy at the expense of the entire community.

To effect change, we must work to build and not destroy. This is more than property paid for by community members; these buildings host critical materials and spaces that provide essential services and support to our community at large. The damage is costing millions of dollars that could be used to help people during an already challenging time.

Officers continue to respond each night, knowing they will have rocks, fireworks, and more thrown at them. They see the injuries sustained by their co-workers and wonder if this will be the night they are injured as well. Officers continue to respond in order to protect life and safety and arrest those responsible for criminal acts. Morale is low as they face what appears to be endless destruction within the City they took an oath to serve and protect. I am bolstered by their grit and determination to do everything they can each and every night to prevent a worst case scenario.

We continue to get asked how this will end and how the violence will stop. The solution is in a critical mass of community and partners coming together to denounce this criminal activity and call it out as it does not represent what we know our community at large wants or values. The solution includes broad support for the police to do their job in exhausting and challenging circumstances. The solution also includes elected officials and people in positions of power coming together in support of the real change, but against those who continue to feel empowered to act in a way that devalues our City with every brick thrown, every fire lit, and every crime committed.

The stakes are high and the world is watching. We are on the national stage right now. I would much rather be known for being leaders in change rather than nightly violence.