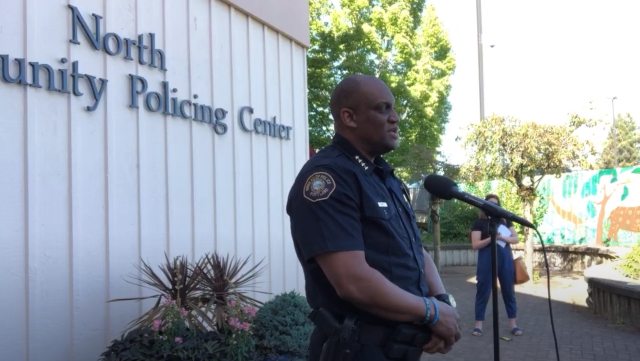 PORTLAND, Ore. — Portland Police Chief Chuck Lovell on Tuesday afternoon addressed the nightly violence in the city that has been going on for three months.  He spoke outside North Precinct.

Chief Lowell discussed how draining the demonstrations have been on officers and the department’s resources, the bureau’s tactics, Saturday’s counter-protests, the calls to defund police and more.

“I’ve seen as many as 80 calls holding.  We’ve had calls holding upwards of 20-something hours.  Sometimes if we have to call a mobile field force from one of our precincts to downtown or to another area to do crowd control, that leaves the precinct with just a handful of cars to take calls.  And if you get a shooting or something that requires a lot of resources, there’s just noone to go sometimes,” said Chief Lovell.

Chief Lovell says he’d much rather spend time talking about how to move forward with police reform instead, but he says doing crowd control has taken away from that conversation.  The Chief says he’s open to having a conversation, but he says: ” I really think abolishing the police is just not where we’re at right now”.