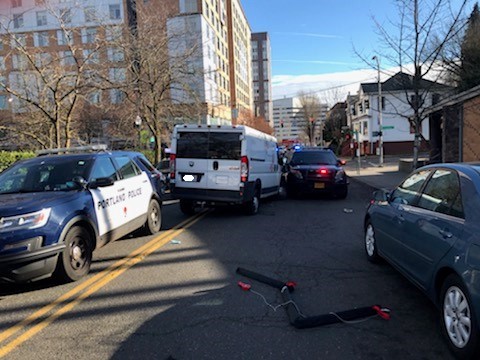 PORTLAND, Ore. — A man wanted on warrants was arrested after allegedly stealing a van and damaging two police vehicles in downtown Portland while trying to getaway late Wednesday morning.

Officers were dispatched to a fight at Southwest 6th and College Street.  An officer on a separate call learned that the fight may have involved a stolen cargo van that he was taking a report on.

The van was located with the suspect inside near Southwest Broadway and Jackson Street.  Spike strips were deployed to try and prevent him from going any further.  When they asked the driver to get out, they say he put it gear, drove over the spike strips, rammed two police vehicles, got out and ran away.  One of the vehicles was so heavily damaged it had to be towed.

Officers briefly lost sight of the man and set up a perimeter.  He was located again, but vaulted a fence and continued running.  Officers continued to pursue him.  The suspect spit in two officers’ faces during his arrest.

32-year-old Brian Denault was booked into jail on multiple charges including several warrants.  He was determined to be driving impaired as well.