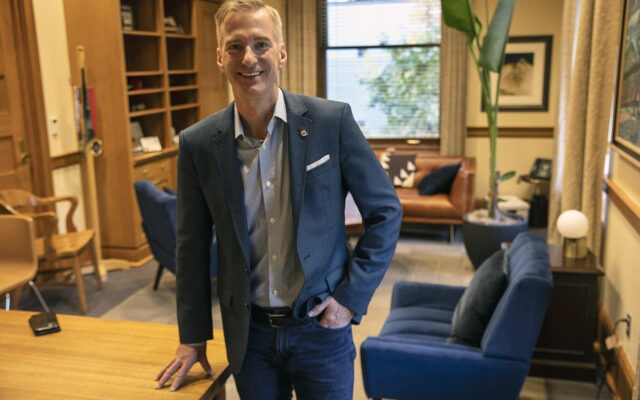 PORTLAND, Ore. (AP) — Oregon’s Portland mayor fought for a second term in an election upended by the city’s sustained protests against racial injustice and police brutality and by the national attention from President Donald Trump and right-wing groups that support him.

Mayor Ted Wheeler, a career Democrat, faced a strong challenge from a candidate to his left who has never held elected office but who has capitalized on the fallout from five months of sustained protests following George Floyd’s death in May. Wheeler was leading in early returns late Tuesday but the race remained too early to call.

The demonstrations — many of which ended in vandalism, arson and violence — made Portland national news in a divisive election year, and Trump routinely derided Wheeler as a weak liberal unable to stop unrest in his “anarchist” city.

Wheeler fumbled early on as he tried to appease both business owners and moderate voters while also attempting to retain the support of those to his left, who criticized the police response as overly aggressive.

Challenger Sarah Iannarone tapped into the protest energy — at one point declaring “I am Antifa,” the shorthand term for anti-fascists and an umbrella description for the far-left-leaning militant groups that resist neo-Nazis and white supremacists at demonstrations and other events. Her appeal with far-left, progressive voters angry at the police response to the unrest galvanized her campaign.

After trailing by double digits in the May primary, the most recent polls show the race as too close to call with many voters still undecided or opting for a write-in candidate from the Black Lives Matter movement.

Iannarone supports $50 million in cuts to the Portland Police Bureau budget and slammed Wheeler, who is also police commissioner, for not doing the same.

Since May, Portland has cut about $15 million from the police budget — including a gun violence reduction team, transit police and a school resource officer program — but Wheeler resisted pressure to take away more from the bureau’s nearly $250 million budget without a safety net for mental health and homelessness calls that police handle daily.

Last week, Wheeler led the City Council in asking for more time to consider another $18 million in police cuts. That vote will now take place after Tuesday’s election. His refusal to vote on the additional cuts led the city’s only Black councilwoman to endorse Iannarone in the campaign’s final days.

Iannarone’s supporters also felt that Wheeler’s decision to feud publicly with Trump in news conferences and on social media was a distraction from multiple local crises — homelessness, the pandemic and the protests — that needed strong leadership.

The protests and Wheeler’s inability to bring them under control attracted right-wing groups to the city, including the Proud Boys and Patriot Prayer, who heeded Trump’s call to restore “law and order” in Democrat-led cities roiled by protests.

Members of those groups brawled openly in the streets with left-wing demonstrators on several occasions over the summer. In August, a Trump supporter was fatally shot after a pro-Trump caravan drove through the city and skirmishes broke out in the street.

The suspect in the shooting, a self-described antifascist, was fatally shot by law enforcement officers who were trying to arrest him a week later near Olympia, Washington.