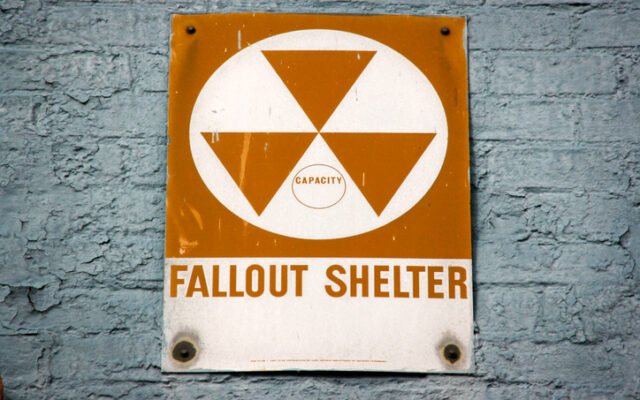 PORTLAND, Ore.– Portland Bureau of Emergency Management stresses the importance of being prepared for all hazards.  Having supplies on hand and a neighborhood network  will be very important.  Dan Douthit, spokesperson for PBEM says, “A nuclear threat would be extreme.  If there was such a threat, Portland would get an alert from FEMA. It would go out on the Emergency Alert System to our cell phones.  Aside from receiving direction from the Federal Government there isn’t much the Portland Bureau of Emergency Management can do.” Douthit remarks signing up for public alerts is critical in preparation for any kind of hazard.

The Cold War started sometime between 1946 and 1947.  While there was peace at the time, America and the USSR engaged in an aggressive arms race with the goal of world dominance.

The Civil Defense System came into play in 1951 and stayed in place through 1994.  Communities across the country introduced fallout shelters in case the U.S. could be bombed.  School Children were taught to cover there faces, brace their necks and get under their desks. Safety drills were conducted at schools on a regular basis. Large brick school buildings and churches were used a bomb shelters.  Specific buildings had the Civil Defense orange, black and white metal signs mounted where they were easily seen.

There was bunker dug out under Kelly Butte, the hold home of emergency facilities including the hub for 9-1-1.  That bunker would be used by the Mayor and other city and county leaders  in the case of an extreme situation. The idea was to maintain the continuity of government so services to the public could still provided.  The bunker was completely sealed off in the 90’s.  It was featured in the film, “A Day Called X” This was a simulated evacuation of Portland in the 50’s during a nuclear attack.  It dramatized what a shelter situation and evacuation would like.  The film gives a good view of what the Kelly Butte site looked like.

OEM says it does not have an inventory of suitable bomb shelter sites. In a statement it says, ” Most public buildings identified as civil defense shelters during the Cold War were ill-suited for protections from thermal effects of  a nuclear warhead. Efforts now have shifted focus to dealing with cybersecurity concerns.  Oregon’s Emergency operation plan has been developed in coordination with other key agency partners to evaluate the impacts of the war in Ukraine.”