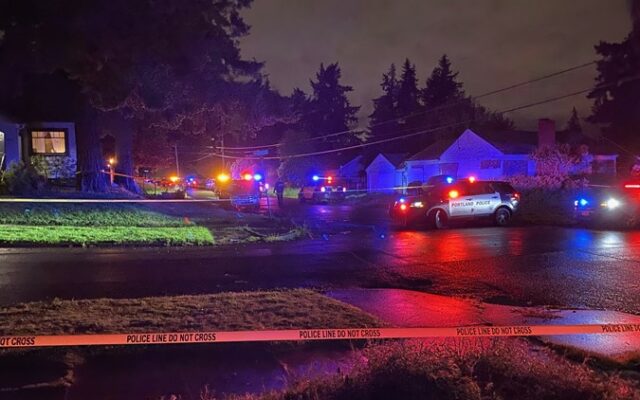 PORTLAND, Ore. — Portland Police Detectives have confirmed that Four officers with the Focused Intervention Team (FIT) were involved in a Shooting Friday night in Northeast Portland.  The officers had made a routine traffic stop shortly before 9:15pm at the Intersection of NE 78th and Mason. During their encounter the suspect was shot and was transported to a local hospital with life-threatening injuries. The suspect remains in critical condition, He is an Adult Male. Police will only release his name when charged with a crime.

The Officers involved are all three to five year veterans of PPB, while one is a 12-year veteran of the Force. They are Officer Adi Ramic, Officer Michelle Petty, Officer Whitney Anderson, and Officer John Bartlett.

The Portland Police Homicide Unit responded to the scene and remained there several hours conducting a thorough investigation.
Acting Police Chief Mike Frome states in a release , “This was an incredibly dangerous situation in a residential neighborhood where families live.” Acting Chief Frome is grateful that the officers and community members are okay. He adds that this serves as a reminder of the dangerous nature of the job Police encounter on a day to day basis working to keep the community safe. He also said it underscores the importance of addressing Portland’s gun violence problem.

PPB is conducting an Internal Use of force review of this incident. The four officers involved are all on Paid Administrative leave as per protocol. That review looks at initial response, resources requested, tactics used, and post shooting actions. This case will be discussed by the Portland Police Review Board, comprised of community members, Bureau members and representatives of the Independent Police Review Division.
Acting Chief Frome responded to the scene while Chief Lovell is out of the state.