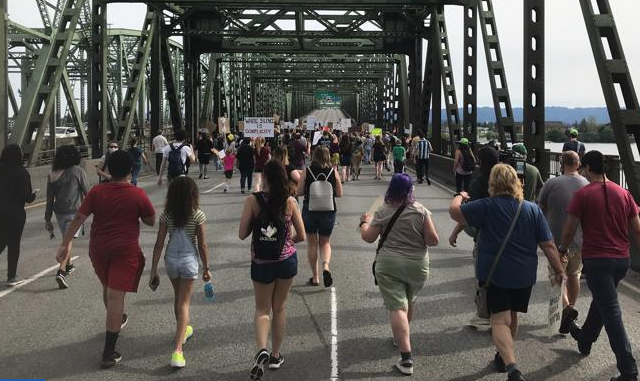 Vancouver, Wash. – Update: A group of protesters have walked onto I-5 South at the Interstate Bridge, blocking traffic heading from Vancouver to Portland Friday afternoon.  News Partner KGW is live streaming the protest. Watch here:
A possible heads up for drivers in Portland and Vancouver. Police say there is a planned, unsanctioned event that will be occurring this afternoon from 3:30-7:30 p.m. which includes a gathering at Esther Short Park in downtown Vancouver. It’s expected to draw a large crowd. Event organizers indicate they will march from the park location to the I-5 Bridge where they anticipate remaining for a period of time. Due to possible disruption to traffic on I-5 and the Interstate Bridge, the Vancouver Police Department is working with the Washington State Patrol and other regional partners to mitigate any safety issues that may arise. Our goal for the event is to protect the safety of the event participants as well as the general public.

Commuters in the area of downtown Vancouver and the I-5 area near the Interstate Bridge (both directions) may want to consider making alternate travel plans or prepare for possible detours or delays while this event is occurring.