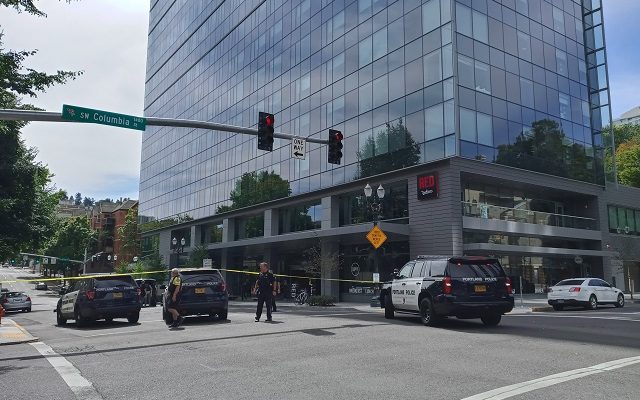 Portland, Ore. – Update: At 4:46 p.m., the woman was taken into custody by officers. The woman was transported to an area hospital by ambulance for a mental health evaluation. The closure on Southwest Broadway has been lifted.

On August 19, 2020 at 12:58 p.m. Central Precinct Officers were dispatched to a call of a woman armed with a kitchen knife stabbing a building in the 1300 block of Southwest Broadway.
Officers arrived and attempted to speak with the woman and try to get her to drop the knife.

The woman has retained the weapon and additional officers have been requested to assist. Officers with Enhanced Crisis Intervention Training, Behavioral Health Unit Officers and a limited deployment of the Crisis Negotiation Team have responded to try to get to a peaceful and safe resolution.

Officers are familiar with the woman and there have been several interactions in the past few days involving calls with her and dangerous behaviors including throwing rocks at cars and climbing on a vehicle overpass.

Officers have been able to provide her water and cigarettes in an attempt to build rapport and get her to agree to disarm.

Broadway is closed from Southwest Jefferson to Market Streets as officers attempt to resolve this situation. Please avoid the area.

Portland police are asking you to please avoid the area around the Radisson Red Hotel in downtown at SW Jefferson and Broadway. A Police Supervisor on scene tells Fm News 101 KXL the preliminary information is that they are trying to help a woman armed with a knife, having a mental health crisis. This is a developing situation and more details are not yet available.  Several listeners called the KXL newsroom to report the police activity and traffic closures around SW 6th and Clay and at SW Jefferson and Broadway.

Police are confirming it’s not a bomb threat, as some were initially reporting.