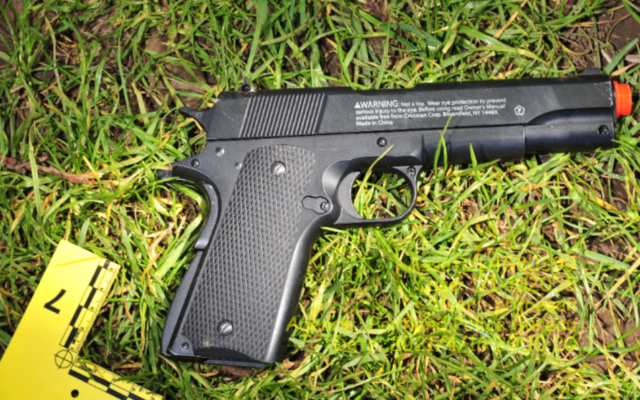 PORTLAND, Ore. — Portland Police learned after they shot and killed 46-year-old Robert Delgado last Friday at Lents Park that the gun he had in his possession was a replica and that he suffered from mental illness.

Dispatch audio reveals that a man called 9-1-1 when he saw a person in a red shirt and black pants doing quick draws with a gun like a cowboy or James Bond might do.

When the first officer arrived, he noticed Delgado wandering around shirtless.  Other officers arrived and surrounded the park.  Police say Delgado did not respond to any of their commands.  At one point, he flipped them off.  Officers believed the gun was in his back pocket.

Delgado was shot from 90′ away with an AR-15.  He was not moving.  Officers reported the shooting and dispatched an ambulance and then made a plan to approach him with a shield.  They performed CPR, but Delgado was dead.

The case is under administrative review as part of the use of force process.  The case will go before a police review board.  A Multnomah County Grand Jury will also weigh on this case.