Police: Cartels in Oregon are morphing their pot-growing ops 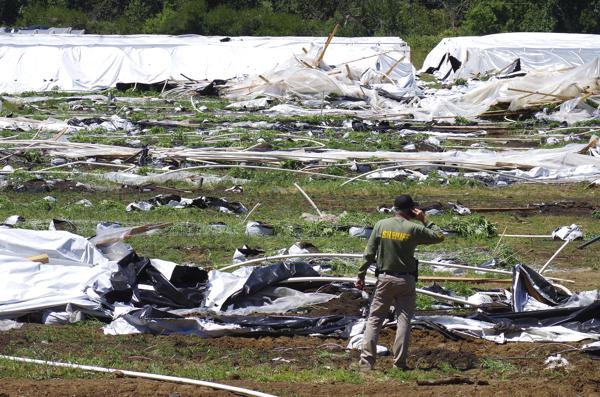 New challenges are emerging as a task force created by the Legislature met for the first time to figure out how to combat cannabis-related problems, some of which threaten Oregon’s legal, regulated recreational marijuana industry.

The Task Force on Cannabis-Derived Intoxicants and Illegal Cannabis Production is also responsible for recommending funding and command structure to enable law enforcement to combat illegal cannabis production, changes to state laws to address labor trafficking and water theft by the cartel-financed pot farms and regulations on genetic engineering of cannabis, among other issues.

“It started with a simple ask of help and it’s turned into, ‘Oh, my goodness, there’s so much to deal with.’ And so I think we just have to kind of take one at a time,” said state Rep. Lily Morgan, a Republican from the southern town of Grants Pass, as the task force met via video link.

One of the biggest problems is the recent proliferation of illegal, industrial-sized marijuana farms.

In early 2021, hundreds of greenhouses began cropping up in southern Oregon’s Josephine and Jackson counties — some within city limits, others brazenly established along highways or tucked into remote valleys.

They were not licensed by the Oregon Liquor and Cannabis Commission and are financed by foreign criminal cartels, from Latin America, Europe and Asia, authorities have said. There were more pot farms than overwhelmed law enforcement officials could take down. Indoor illegal growing operations have long existed indoors, but now criminal gangs are pushing more in that direction, enabling them to grow year-round, a task force member said.

“We’re starting to hear about Josephine County, a lot of operations moving indoors,” said Oregon State Police Sgt. Tyler Bechtel. “It makes it all that much harder to see it from the street, see it from the air, just smell it. And it’s not a seasonal problem when you move indoors. It’s a year-round problem.”

Josephine County Sheriff Dave Daniel, though, said he hasn’t heard of cartels operating in his county moving to indoor grows and are instead lowering their profile by establishing more numerous smaller grow operations.

“They seem to be diversifying and spreading out operations to many small grows to avoid the attention,” Daniel said in an email to The Associated Press. “We anticipated this change as we have primarily been focusing on the large grows and now smaller ones. It is a good business move for them and will slow us down.”

Giving an idea of the scope of the problem, the Oregon Criminal Justice Commission says 551,000 marijuana plants were seized in Jackson County, Josephine County and central Oregon’s Deschutes County from July 1, 2020, to June 30, 2021. And that was a tiny fraction of the illegal crop. Authorities also seized almost $3.4 million in cash in the raids.

The report examined results after an outlay of millions of dollars in grants to the three counties to address increasing unlawful marijuana cultivation and distribution operations in Oregon. The commission said it could not judge the effectiveness of the grant program “because the illegal marijuana market is an especially nebulous sector to evaluate.”

The Task Force must provide its findings to an interim committee of the Legislature by Dec. 31, 2022.