GARDEN GROVE, Calif. (AP) — A gang member who killed four people and wounded two others in random stabbings across two Southern California cities has a violent past, police said Thursday, and court records show he was free on bail for a charge last month of carrying a concealed dagger.

Zachary Castaneda “could have injured or killed many other people” had he not been arrested Wednesday after two-hours of robberies and vicious knife attacks, Garden Grove police Chief Tom DaRe said Thursday.

A blood-covered Castaneda was taken into custody when he walked out of a convenience store in neighboring Santa Ana, dropping a knife and gun he had taken from a security guard he had just killed, police said.

Castaneda was kept in restraints as detectives tried to interview him.

“He remained violent with us through the night,” DaRe said. “He never told us why he did this.”

Castaneda’s long criminal record includes prison stints for possession of meth for sale while armed with an assault rifle and car theft. He served about two years of a four-year sentence and was released on probation in January 2016, according to the California Department of Corrections and Rehabilitation.

His arrest last month on charges of having a concealed dagger and drug charges came while he was on bail for his June arrest on charges of street gang vandalism.

Castaneda was convicted in 2009 of spousal abuse and paroled after serving about a year in prison, corrections officials said. He was released from parole in that case in 2014.

The violence Wednesday appeared to be random and the only known motive seems to be “robbery, hate, homicide,” Garden Grove police Lt. Carl Whitney told reporters.

Whitney said police had previously gone to Castaneda’s Garden Grove apartment to deal with a child custody issue. The suspect’s mother had been living with him and had once asked police how she could evict her son, he said.

Court records show his wife, Yessica Rodriguez, sought a restraining order last year after she said Castaneda threw a beer can at her 16-year-old daughter. She said also sought an order against him in 2009 when he broke her arm during a fight.

Rodriguez filed for divorce earlier this year, court records show, and has custody of two sons, ages 7 and 12.

It wasn’t immediately known if Castaneda, 33, had a lawyer who could speak on his behalf for the current allegations. Public defenders who previously represented him did not immediately return messages seeking comment.

He was scheduled to be arraigned Friday.

The two people who were wounded were expected to survive.

One of the dead, identified by police as a Garden Grove resident, was a hard-working immigrant originally from Romania, his son said.

Erwin Hauprich said his father, Helmuth Hauprich, 62, called him Wednesday and told him his Garden Grove apartment had been burglarized. His passport, green card, sword collection and even a dining table were taken.

Erwin Hauprich said his father never called back and he went to check on him after hearing there had been a stabbing at the complex.

A police officer told him that Helmuth Hauprich had been taken to the hospital, where he died, the son said. He said he was told his father’s roommate was killed in the apartment. 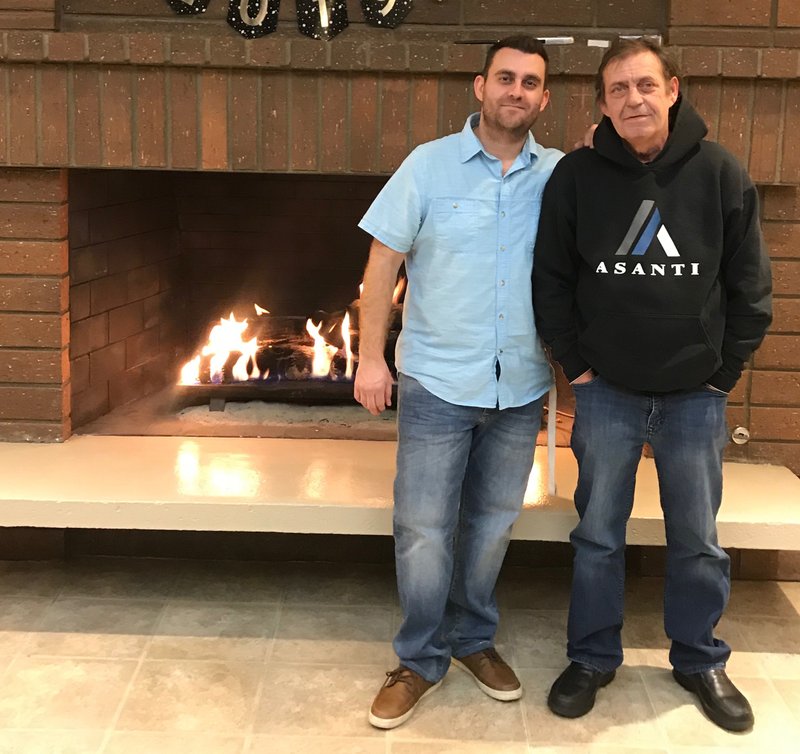 Police didn’t identify the other man killed but said he was 63 years old.

A body was removed from the complex by stretcher Thursday.

The suspect lived in the apartment complex, police said.

Erwin Hauprich said his father left Romania for Germany and then the U.S. more than two decades ago. He said his father worked on an assembly line and was a down-to-earth man who strove to make a life for his family.

Surveillance cameras caught some of the carnage.

“We have video showing him attacking these people and conducting these murders,” Whitney said.

During Castaneda’s rampage, he robbed a bakery, where the owner avoided a potentially violent confrontation because she was in her car charging her mobile phone.

Baker Dona Beltran said a tattooed man got out of a Mercedes and went into the business. Beltran followed him inside to offer help but kept quiet when she saw him trying to open the cash register.

She then ran out of the shop and yelled she was being robbed before taking refuge in a nearby dental office, she said. He ended up taking the entire register with him, which had about $200, she said.

“I saved myself because I was in the car,” she said in Spanish on Thursday. “Thank God I am alive.”

The man also robbed an insurance business, where a 54-year-old woman employee was stabbed several times but was expected to survive.

Surveillance video released Thursday showed a man in a hoodie entering the office, confronting the woman as she sits at a desk, then suddenly pulling two knives — one of which appears to be a butcher knife — and stabbing at her at least a dozen times as she throws up her hands to defend herself. The woman then gets up and runs into a corner, blocking the man by putting two chairs between them. He then appears to steal something from the office and leaves.

Police said she was hospitalized in critical but stable condition.

She “was very brave,” Whitney said earlier. “She fought as best she could.”

An alarm company saw the robbery on a live television feed and called the police.

The man fled with cash and also robbed a check-cashing business next door, the lieutenant said.

Afterward, the attacker drove to a Chevron station, where he attacked a 44-year-old man pumping gas “for no reason,” Whitney said.

The man was stabbed in the back and “his nose was nearly severed off his face,” the lieutenant said. He was hospitalized in stable condition.

Undercover detectives tracked the suspect’s silver Mercedes to the parking lot of the 7-Eleven in Santa Ana and within a minute the man emerged from the store, carrying a large knife and the gun he had cut from the belt of a security guard after stabbing him, Whitney said.

Police ordered the man to drop his weapons and he complied and was arrested.

Robert Parker, 58, of Orange, died at the 7-Eleven in Santa Ana, according to the Orange County coroner’s office.

Police then learned that Pascual Rioja Lorenzo, 39, of Garden Grove, who worked at a nearby Subway restaurant, also had been fatally stabbed during a robbery, officials said.

The brutal and puzzling attacks came just days after a pair of mass shootings in Texas and Ohio left 31 people dead and stunned the nation.