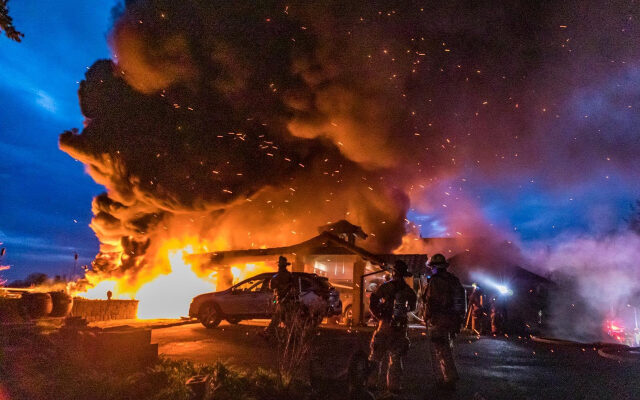 FAIRVIEW, Ore. — A man died in a fire and a woman was rescued from their home on NE Interlachen Lane on the edge of Blue Lake Park in Fairview early on the morning of March 18th.

A Gresham Police officer and an off-duty Portland firefighter were the first to come across the scene.  They used a ladder to reach the woman who was trapped on a balcony.

FM News 101 has obtained body camera video of the incident.  Portland Fire and Rescue wishes to recognize the men and women of Gresham Fire and Gresham Police for their quick and professional response.

Portland Firefighter Kevin Dolphin, a 7-year veteran was on his way to work at Station 7 in Southeast Portland.  He got a ring from the Pulse Point app on his phone alerting him to a nearby house fire.  He looked in the direction of the address and could see the glow and a huge column of smoke.

Dolphin watched the video from Gresham Police Officer Tim Tacca who arrived at the scene before him.  Officer Tacca found the woman standing on the balcony screaming.  He tried to get into the home several times to save the woman’s husband, but the flames and smoke were so intense.

Kevin showed up in running pants and a sweatshirt, not with heavily insulated flame resistant firefighting gear.  He had no air tank or mask to breathe from.  He calmly asked the woman some questions about where the man inside might be and ran for an aluminum ladder.  Kevin made four attempts through thick dark smoke and flames to try and save the man trapped inside.

“I kept track of the wall by sliding my foot along it,” he said.  He eventually made way for Gresham’s professional firefighters to do their job.  “It’s not my place to talk about this like I did something great.”

The victims have not been identified.  The cause remains under investigation.