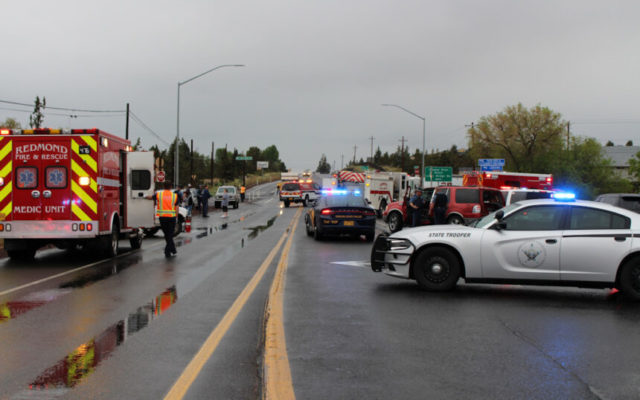 Jefferson County, Oregon – A passenger was killed in a chain reaction crash on Highway 97 south of Madras Saturday afternoon. They were stopped in backed up traffic on the highway because of another crash and fire, when they were hit from behind by an SUV, pushed out into oncoming traffic, and hit again. The person who died is 21-year-old Gavin Hermosillo. It’s unclear why the driver of the SUV, 54-year-old Donald Matney, didn’t stop for the traffic, or if he’ll face charges.  All three people who survived the crash went to the hospital with injuries.

On Saturday, August 15, 2020 at approximately 4:00 P.M., Oregon State Police Troopers and emergency personnel responded to the report of a four vehicle crash on Hwy 97 near milepost 108 between Madras and Terrebonne.

Preliminary investigation revealed that a red 1993 Chevy Blazer, operated by Donald Matney (54) of Redmond, was traveling southbound and crashed into the back of a stopped 1999 white Chevy Cavalier operated by Emily Worthington (19) of Terrebonne.

Traffic was stopped at this location due to another vehicle crash and fire approximately 5 miles south.

The Cavalier was pushed into another vehicle and subsequently across the oncoming lane where a northbound vehicle had a minor collision with the Cavalier before coming to rest.  The other involved vehicles were identified as a  Jeep Cherokee and a white BMW X2.  Both of these vehicles were occupied by multiple occupants and were treated for non life-threatening injuries.

The Chevy Cavalier had two passengers, Gavin Hermosillo (21) of Terrebonne who sustained fatal injuries and was pronounced deceased and a 12 year old who was transported via ground ambulance to an area hospital for serious injuries.

Matney and Worthington were both transported to area hospitals.