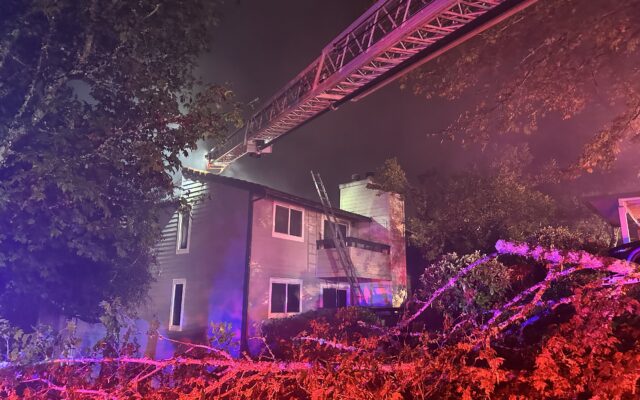 Firefighters rescue a total of 7-residents from the second story of apartment complex in SW Portland, early Saturday morning.

PORTLAND, ORE — Deputies arrest a 51 year old Portland woman they connect to a Washington County apartment fire.  Wendy Kay Southam’s booked into the Washington County Jail on charges of arson, animal abuse, assault and criminal mischief.  Investigators connect her to the fire that broke out on Southwest Barnes Road  in the early hours of Saturday.

Eight-people went to a hospital and many more were left without a home,  after an overnight fire at the West Hills Apartment complex in SW Portland. Fire crews from Tualatin Valley Fire & Rescue arrived on scene shortly after 3:00 Saturday morning after many neighbors called 911 saying they saw huge flames and thick black smoke coming from the complex.  The fire was so extensive that it was soon upgraded to a second alarm to bring in more resources.

Portland Fire & Rescue sent three units to help put out the blaze. The fire caused significant damage to multiple units inside the building.

Firefighters were able to rescue many pets from the fire and assist seven residents  from the second story. A total of about two-dozen residents are displaced after the fire.  Minor injuries were sustained due to the escape and smoke inhalation. One Firefighter was treated for heat exhaustion.