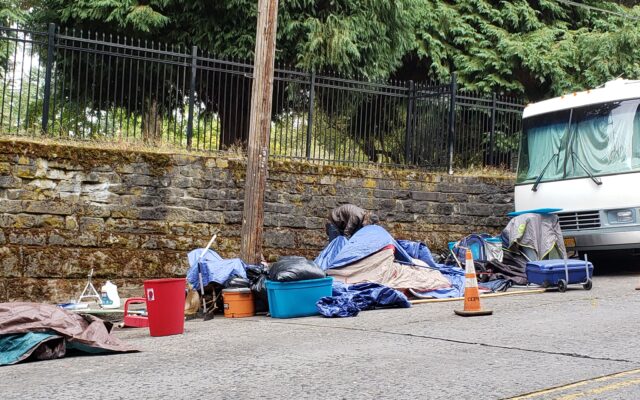 PORTLAND, Ore. (AP) — At least 207 Oregonians have died while experiencing homeless this year.

That’s according to preliminary data from the Oregon Health Authority, The Register-Guard reported.

This is the first time Oregon has released such numbers. Senate Bill 850, which passed last year, requires all Oregon counties starting this year to track how many people die without shelter.

The data shows people died in every adult age group but a third of deaths involved people between the ages of 55 and 64. Nearly 80% of the counted deaths were men. The preliminary data attributes 74% of the deaths to natural causes. Other manners of death include unintended injury, suicide and homicide.

In Oregon, the average life expectancy is about 80.

The Oregon Health Authority is making an annual reporting dashboard that will have more detail, according to spokesperson Jonathan Modie. It should be available in fall 2023.

The data is an “opening to a conversation,” said Chris Hecht, executive coordinator at Eugene-based nonprofit White Bird Clinic.

“It’s great to know that OHA is doing this, for sure,” Hecht said.

Those providing resources and services already have an intimate understanding of the hardships faced by those living unsheltered and may not be surprised by the numbers, he said, but the data may be helpful from an epidemiology and public health perspective.

Hecht hopes more detailed reports in the future could help service providers focus on the most acute needs, such as taking care of unhoused people after they are discharged from hospitals.

“Would that (death data) provide support for us wanting to push discharge care coordination?” Hecht said. “We as a community aren’t doing a good enough job on it. I think that this kind of data will give us ammunition for arguing toward that.”

She noted that a disproportionate number of the counted deaths were among American Indian and Alaskan Natives, which accounted for 14 of the 207.

“I’m so sad for those 207 people and their families,” Patterson said. “We have so much work to do.”

The count isn’t new for Multnomah County, which includes Portland. Since December 2010, Multnomah deputy medical examiners have noted which people may have been homeless at the time of death.