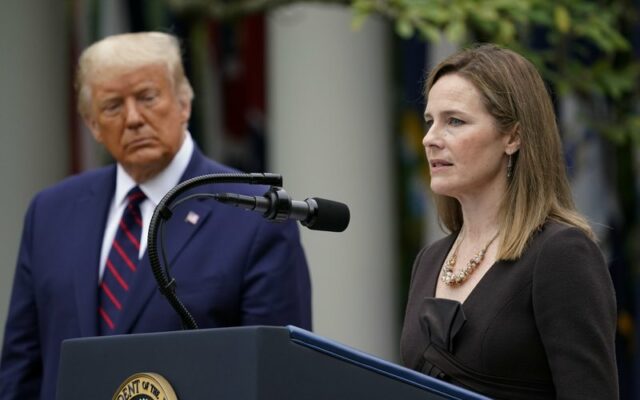 Oregon – Oregon’s Democratic Senators likely won’t be voting to confirm Judge Amy Barrett for the U.S. Supreme Court. Both Senators Jeff Merkley and Ron Wyden released statements about President Trump’s nomination. Senator Jeff Merkley says this is a fight over potentially life-or-death consequences for millions of Americans. Suggesting Barrett will help overturn Roe v. Wade and strike down the Affordable Care Act, which Merkley says will result in loss of access to affordable health insurance including coverage for pre-existing conditions.
Senator Ron Wyden says, “Donald Trump and Mitch McConnell have made it clear they will pull out all the stops to jam through another right-wing Supreme Court nominee – even if that means breaking their own rule pertaining to election-year appointments.

Senate Finance Committee Ranking Member Ron Wyden, D-Ore., released the following statement in response to the nomination of Judge Amy Coney Barrett to serve on the U.S. Supreme Court: “Donald Trump and Mitch McConnell have made it clear they will pull out all the stops to jam through another right-wing Supreme Court nominee – even if that means breaking their own rule pertaining to election-year appointments. If you don’t trust Donald Trump and Senate Republicans with your health care, you shouldn’t trust them with filling this Supreme Court seat. Here’s the bottom line: every senator who votes for this nominee is voting to strip away quality, affordable health care – and protections for pre-existing conditions – from hundreds of thousands of Oregonians and millions of Americans.”

“This is an effort to pack the court with folks who have and will consistently rule against ordinary Americans for the privileged and powerful. For years, the Supreme Court has been essentially a third legislative body deciding women’s rights, workers’ rights, health care, climate action, and more. The goal today is to lock in advantage for the privileged and powerful for an entire generation to come.

“We particularly have to recognize the huge impact that this vacancy will have on health care—both on women’s health and the affordability of care for the countless Americans with preexisting conditions.

“We knew even before this nomination that President Trump’s litmus test for any Supreme Court nominee is a requirement that they help overturn Roe v. Wade and strike down the Affordable Care Act. The Senate is confronted not only with the record and philosophy of Amy Coney Barrett, but also the profound human consequences of what the loss of access to affordable health insurance, to coverage for pre-existing conditions, and to birth control and legal abortion will mean for American families—especially those who are low-income, rural, and from communities of color.

“Let’s remember that this battle is not about horse race politics or palace intrigue—it’s about whether an impeached president and a Senate, both elected by a minority of the American people, are able to complete a shameless power-grab that will ruin lives.”