Oregon Under State Of Emergency For Wildfire Danger 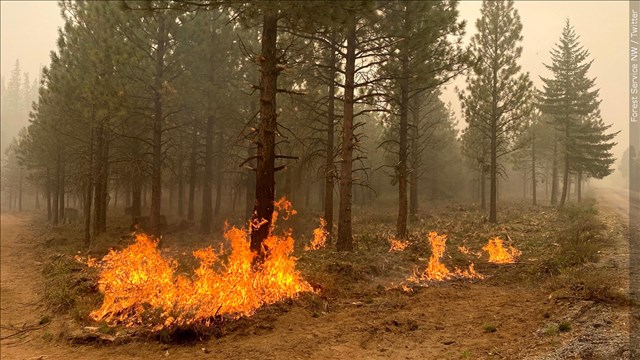 Salem, Ore. — Tuesday, Oregon Governor Kate Brown declared a state of emergency due to the imminent threat of wildfire across Oregon.  While the declaration was made Tuesday, the public was not notified until Wednesday morning when the Governor’s office issued a press release.

“Oregon is still recovering from the devastation of last year’s wildfires, which resulted in nine Oregonians losing their lives and thousands more losing their homes,” said Governor Brown. “With wildfires already sparking this year, it is imperative that we act now to prevent further loss—of life, property, business, and our natural resources.

“I issued this emergency declaration to ensure every resource is made available for firefighting efforts and to the crews striving to protect our state. With fire seasons increasingly starting earlier and lasting longer, it is up to each of us to do our part to prevent wildfires and be prepared for the ones we can’t prevent. I am urging Oregonians to take charge in preventing human-caused fires by being prepared, safe, responsible, and aware.”

Pursuant to ORS 401.165 et seq, Governor Brown determined that a threat to life, safety, and property exists due to the imminent threat of wildfire. The Governor’s declaration authorizes the Oregon Department of Forestry and the Oregon Office of the State Fire Marshal, in coordination with the Oregon Office of Emergency Management, to utilize personnel, equipment, and facilities from other state agencies in order to respond to or mitigate the effects of the wildfire emergency.

The declaration allows state agencies to temporarily suspend any rules that impair the response to wildfires, if needed, and also allows the state to request assistance from other states through the Emergency Management Assistance Compact if necessary. The emergency declaration is focused on helping to ensure that the state is prepared to marshal all available and necessary resources as quickly as possible as wildfires arise during this wildfire season.

When state and national resources are limited, the Oregon National Guard will deploy firefighting resources in accordance with Operations Plan Smokey 2021.

President Biden says the threat of wildfires in the Western U.S. is as severe as it’s ever been. Speaking with Cabinet officials and Governors, Biden said extreme heat and drought is getting worse while the government is “playing catchup.” He said there must be a whole-of-government response to prepare and make sure no corners are cut when managing wildfires. Biden said the blazes are not a partisan phenomenon as it will take everyone coming together.

According to the Northwest Interagency Coordination Center, as of Wednesday there are two “large” wildfires burning in the state. The S-503 fire near Pine Grove is 95% contained and the Cutoff Fire near Bonanza is 98% contained.  Several other smaller fires are burning as well.