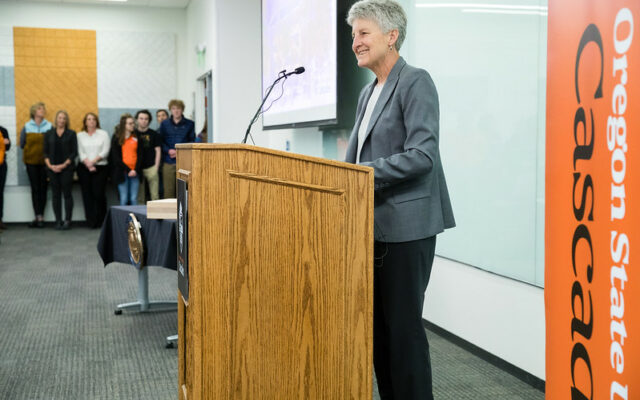 Johnson has been Vice President of OSU-Cascades since 2009.

And when she takes over as President in Corvallis on May 1st, she’ll become the first woman in the position.

She replaces F. King Alexander, who resigned in March after allegations he mishandled sexual misconduct claims while President at Louisiana State University.

Johnson is expected to lead about a year.

CORVALLIS, Ore. – The Oregon State University Board of Trustees on Friday voted unanimously to name Rebecca “Becky” Johnson as the university’s interim president.

Johnson has served as vice president of OSU-Cascades since 2009. She joined OSU in 1984 as an assistant professor in the College of Forestry, before ascending into college and university academic and administrative leadership positions.

Johnson will begin her interim presidency on May 1 and serve as the top leader of the state’s largest university for approximately a year or until a permanent president is in office. She is OSU’s first woman president.

The announcement follows an extensive community engagement process in recent weeks to gather nominations for the interim president appointment and a community forum with Johnson on Wednesday.

“I am confident that Dr. Johnson is the right leader to fill this interim role,” said Rani Borkar, chair of OSU’s Board of Trustees. “She is most qualified to guide and help advance the priorities and momentum of the university. Over her 30-plus year career, Dr. Johnson has built relationships based on integrity and trust, and those relationships – with faculty, students, staff, donors, legislators, local officials and others – have helped advance the mission of the university.”

Johnson succeeds Acting President Edward Feser, who plans to return to his role as OSU provost and executive vice president. Feser’s appointment resulted from the resignation of former President F. King Alexander on March 23, after concerns arose about his leadership of Title IX matters as president of Louisiana State University. Alexander joined OSU on July 1, 2020.

“I am very excited and grateful to be selected as Oregon State University’s interim president, and look forward to working to help advance the priorities of the university and address the needs of the OSU community,” Johnson said.

“Relying on the north star of inclusive academic excellence in OSU’s strategic plan, we must find ways to expand access to higher education for all qualified students, at both the undergraduate and graduate levels. We must diversify our faculty and staff, not only as role models for our students, but because diversity builds strength. We must grow and diversify our research that addresses the most pressing issues, including climate change, public health, systemic racism and economic inequality.

“We need to continually and persuasively communicate the impact of our research, service and scholarship to local, state, and federal leaders, as well as to businesses and communities,” Johnson said. “We have many great examples of the impact OSU makes. Our OSU Extension and engagement effort is a force multiplier. Yet, we need more state and federal leaders and members of the public to better understand and support public research universities as a critical component of a prosperous and healthy world. We need everyone to know that public research universities do great scholarship and must be more accessible and affordable.”

Under Johnson’s leadership, OSU-Cascades has secured state and philanthropic funding that have helped transform it from a 2+2 degree transfer program based on the Central Oregon Community College campus starting in 2001, to a four-year university in 2016.  Enrollment at OSU-Cascades has nearly tripled to almost 1,400 students. The campus now totals 128 acres and expects to eventually serve 3,000 to 5,000 students.

Over the coming decades, the OSU-Cascades campus will continue to transform a former pumice mine and landfill, a plan that is considered one of the most innovative university development projects in the country.

Johnson has worked closely with regional economic development and industry interests to build programs that increasingly meet their needs for a talented and skilled workforce. The number of graduate and undergraduate degrees offered at OSU-Cascades has more than doubled during her tenure.

Johnson received a bachelor’s degree in economics from the University of Wisconsin-Madison, where she played on the basketball and golf teams. She then received a master’s and a doctoral degree in agricultural economics from Michigan State University. In 2015, she was named the Bend Chamber Woman of the Year; in 2014, the Bend Source newspaper’s Woman of the Year; and in 2009, she received the Bend 2030 Vision Builder Award.

Acting OSU President Ed Feser – in his role as provost and executive vice president – will appoint an interim vice president for OSU-Cascades after gathering input from faculty, staff and internal and external stakeholders.

The appointment of Johnson follows an extensive community engagement process led by OSU Trustee Patty Bedient. Bedient held more than 50 one-on-one conversations with OSU Faculty Senate leaders, staff, student leaders, administrators, university partners and other stakeholders to gather nominations and input on the focus and experience needed in the interim president. Hundreds of comments regarding nominations and focus of an interim president were provided to a Board of Trustees webpage. And a virtual OSU community forum with Johnson as the recommended candidate for interim president was attended and viewed by hundreds.

Trustees heard public comment from 10 people in support for Johnson’s appointment. The Board will begin to consider the search process for a permanent president at its May 21 meeting.