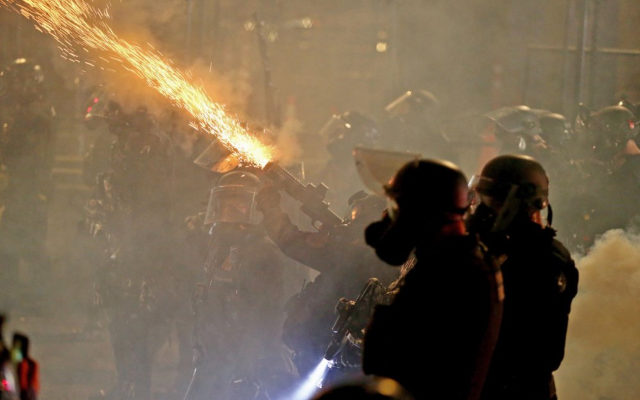 Police use tear gas early Thursday, Aug. 13, 2020 to break up the crowd of several hundred people who gathered near the Mark O. Hatfield U.S. Courthouse. (Sean Meagher/The Oregonian via AP)

PORTLAND, Ore. — FM News 101 KXL confirmed late Thursday afternoon that Oregon State Police have pulled out from protecting the Mark O. Hatfield U.S. Courthouse in downtown Portland which has been under siege during the past 76 nights of demonstrations and riots.

A statement from Captain Tim Fox reads: “The Oregon State Police is continually reassessing our resources and the needs of our partner agencies and at this time we are inclined to move those resources back to counties where prosecution of criminal conduct is still a priority.  Last night (Wednesday) was our last night in Portland.  The decision was based on the fact that our two-week commitment ended last night… Troopers are returning to the communities that they are assigned to serve and protect.  We will continually assess our resources if our partners at PPB need OSP assistance.”

The moves comes just days after new Multnomah County District Attorney Mike Schmidt announced his office would not be prosecuting many of those arrested at protests who have no prior history.

RELATED: Multnomah County D.A. Announcing He Won’t Charge Many Of Those Arrested During Protests

Oregon State Police were brought in two weeks ago after President Trump brought in federal forces following weeks of violent clashes with local police.  A deal was struck between Vice President Mike Pence and Governor Kate Brown to remove federal police and have state troopers take over guarding the courthouse.

We will maintain our current, augmented federal law enforcement personnel in Portland until we are assured that the Hatfield Federal Courthouse and other federal properties will no longer be attacked and that the seat of justice in Portland will remain secure.

In an email to DA Schmidt, Multnomah County Sheriff Mike Reese says he’s concerned that protesters “may feel even more emboldened if there is a public statement that appears to minimize their activities”.