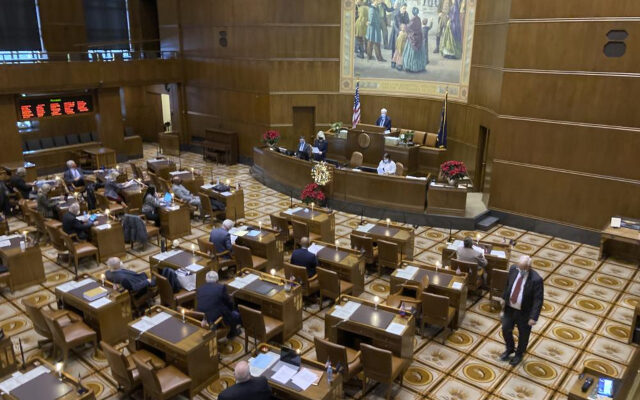 Members of the Oregon Senate meet Monday, Dec. 13, 2021, during a special session of the Oregon legislature, in Salem, Ore. (AP Photo/Andrew Selsky)

During a one-day special legislative session lawmakers passed a $215 million package — which includes $100 million for additional emergency rental assistance for both tenants and landlords and funds to help agencies that have had a hard time getting emergency money out the door to do so more quickly.

“Most of us here have been fortunate enough to be unfamiliar with the urgency, the panic and the desperation that so many in our communities are now experiencing. Having done everything in their power and everything they were told they needed to do to remain housed, they still remain in danger of losing their shelter and safety,” said Rep. Wlnsvey Campos, a Democrat.

More than 67,000 Oregon households recently reported they feel “not at all confident” they can cover next month’s bills, according to the most recent U.S. Census Bureau survey. Despite an overwhelming need, this month the statewide rental assistance program stopped taking new applications after all $289 million of federal funds have been requested and committed to renters. However, due to a backlog $119 million has yet to reach renters.

Margaret Salazar, the director of the state’s Housing and Community Services, said Monday she expects the remaining federal assistance will be administered to Oregon tenants by March 2022. In addition, she estimates the proposed additional state funded rental assistance would be administered by June 2022.

Republican lawmakers have been critical of the Oregon Housing and Community Services “mismanagement” of the application backlog and said the bill fails to hold the agency accountable.

“Anyone who understands how to run a business knows that you do not throw money at something that isn’t working and you don’t cover up inefficiencies by avoiding accountability,” said Republican Rep. Bobby Levy.

Lawmakers also voted in favor of extending the current 60-day eviction protection period. The initial law, which the governor signed in June, grants renters a two-month period in which they cannot be evicted due to lack of payments, as long as they provide proof that they applied for aid.

However an estimated 8,355 households are at risk of eviction, as the safe harbor protection keeping them housed have expired as they continue to wait for aid from the state.

“It would be tragic if Oregonians lost their homes because the money, available to help them, doesn’t reach them in time,” said Rep. Julie Fahey, D-West Eugene and Junction City.

The extension will keep eviction protections to remain in place for a tenant until their application has been processed — and not limited to 60 days.

Differing views on COVID-19 related restrictions and safety mandates also carried into Monday’s special session. Sen. Dallas Heard, R-Roseburg, was escorted out of the chamber after Senate President Peter Courtney deemed his colleague was out of order and in violation of rules for refusing to wear a mask. There is a statewide indoor mask mandate in Oregon.

“I must tell you this is something that makes me sad, very sad Dallas,” Courtney said when Heard refused to put on a mask or leave the chamber. “Assuming the mask mandate still exists during (the next legislative session), we will have to move against individuals who don’t wear a mask and have them expelled before the extent that we can.”

Although there has been tension between the two parties, there were members of the Senate GOP who voted in favor of the Monday’s rental assistance and eviction protection package. Republican Sen. Bill Kennemer described the package as “a legitimate need for this bill and… it’s a balance that’s appropriate.”

GOP lawmakers say that “after repeated failures by Oregon’s housing department to timely implement a rental assistance program” Republicans have reached a bipartisan agreement with majority Democrats to fix the problem and protect landlords and renters.

“When we first started, we were miles apart,” said Senate Republican Leader Tim Knopp, R-Bend. “We were not willing to entertain coming in to pass legislation that we believed would do long-term damage to the rental housing market.”

As part of the agreement, $5 million will be directed to the Oregon Housing and Community Services to speed up the processing of assistance applications and $10 million will be placed into the Landlord Guarantee Fund.

But keeping Oregonians housed were not the only bills that passed. Others were drought relief, illegal cannabis proliferation and support for Afghan refugee resettlement.

One bill that received unanimous support from lawmakers in both the House and Senate was $25 million for a comprehensive, statewide plan to address the proliferation of illegal cannabis around the state and ease the associated humanitarian impacts in Oregon.

Authorities say thousands of immigrants working on southern Oregon illegal marijuana farms that are run by foreign cartels are living in squalid conditions and are sometimes being cheated and threatened by their gangland bosses.

“This is just the tip of the iceberg. Colleague’s human trafficking and human-labor trafficking is happening. People are housed in squalor conditions. It’s just appalling,” Knopp said. “Farm workers deserve so much better. But unfortunately, this borders on slavery.”