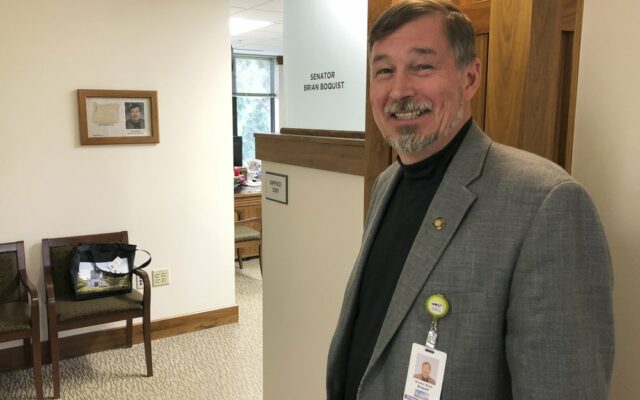 In this photo taken Wednesday, July 3, 2019, Oregon Sen. Brian Boquist poses outside his office in the Oregon State Capitol in Salem, Ore., after an interview with The Associated Press. Boquist once worked in the world's hotspots as a military contractor and soldier and now finds himself under fire, this time from fellow lawmakers and the governor after he threatened state police and the Senate president ahead of a walkout by Republican lawmakers. A Senate special committee on conduct will hold a hearing Monday, July 8, 2019, over Sen. Boquist's behavior. (AP Photo/Andrew Selsky)

SALEM, Ore. (AP) – An Oregon Senate panel has rescinded the security measure it imposed on state Sen. Brian Boquist after he made threatening statements during an acrimonious 2019 legislative session, in a case that centers on free speech.

Since July 2019, Boquist has been required to give 12 hours notice before coming to the Oregon State Capitol, in order to give the state police time to bolster their security.

Boquist maintained in a lawsuit that this measure violates his free speech rights as an elected official. In a ruling last April, the 9th U.S. Circuit Court of Appeals agreed.