UPDATE: Oregon County Vaccination % Goes Down For A Second Day In A Row. 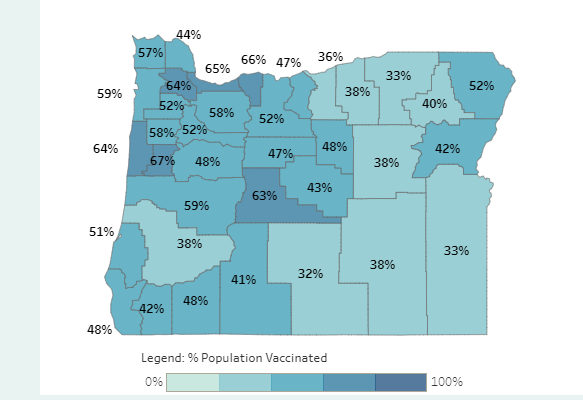 On Tuesday morning, we looked at the OHA website again to see the new numbers and once again, the numbers went down.

KXL is still waiting for information from the Oregon Health Authority as to why these numbers are changing lower.

Portland, Ore. — On May 11th, Oregon Governor Kate Brown announced that counties in Oregon could apply to move to “LOWER RISK” level if the number of vaccinated people in the county was 65% or greater of eligible (16 and older) people. We took note of the number on the OHA Website that day.  We focused on Washington and Multnomah Counties.  The numbers were encouraging and growing at an average of 1.3% and 1.4% per day respectively. Because the OHA says that number for the last three days reported are not accurate because it takes time to report shots given, we looked at May 1st through May 7th.

But something is still not right and we looked at the numbers we recorded on May 11th and the numbers reported May 17th on the OHA website and here is what we found:

Remember the OHA is blaming the drop in percentage on kids aged 12 to 15.  Clearly this is not true.

All of this information was discovered late Monday afternoon. We requested an explanation from the OHA and were told, “Hi Jim: Thanks for follow up. We are working your request. To answer these questions, and given the time when they came in, we won’t be able to reply to you until tomorrow. Thank you for your patience.”

As of Monday night, the OHA listed Washington County at 64.1% vaccinated and Multnomah County at 64.7%.  That means technically, both counties could be left out of being able to apply to move to lower risk.

KXL will follow up with the Oregon Health Authority on Tuesday to demand answers.