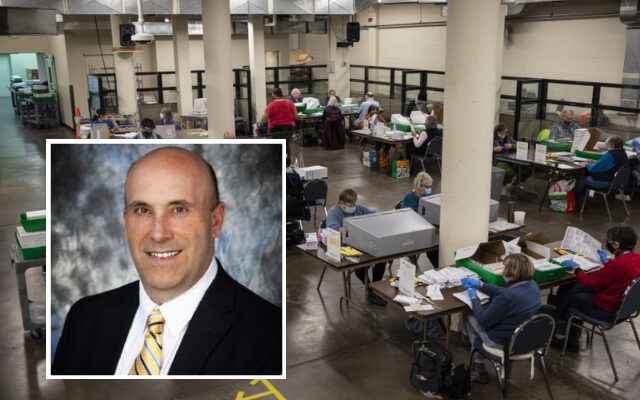 SALEM, Ore. (AP) — Oregon’s elections director was abruptly fired in a text message by the secretary of state after he pointed out serious issues with the state’s aging and vulnerable technology for running elections.

Elections Director Stephen Trout learned in a text message Thursday night — as his department and county elections officials were still counting votes from the Nov. 3 election — that he was out.

On Friday, Secretary of State Bev Clarno, a Republican appointed to the position by Democratic Gov. Kate Brown, announced to county clerks and other elections officials in Oregon’s 36 counties that “today is also Steve Trout’s last day with the Agency.”

Election officials in the state were stunned.

“We are still in the election process right now. We are reconciling, we’re dealing with problems right now as far as your signatures and communicating with voters who didn’t sign the ballots,” Druckenmiller said. “We’re going to have to do recounts, all of these things. She doesn’t understand elections.”

Clarno spokeswoman Andrea Chiapella said Trout was “a knowledgeable advocate for the democratic process on our team” and that he planned to leave on Dec. 15 anyway. Deputy Director Michelle Teed has been named acting elections director, Chiapella said.

Trout said in an email to The Associated Press that although he had already planned to seek a new job, he did not want to go this soon.

“I would never leave in the middle of an election,” Trout said. “This is the toughest part of the election behind the scenes with the canvass, manual audit, electoral college, and recounts. I would not abandon my staff or the counties before the election is over.”

Trout, in a Nov. 2 letter to the Republican and Democratic candidates to replace Clarno, described problems with the internet technology side of the secretary of state’s office and indicated he’d be looking for another job.

He also said $5.7 million in federal virus relief allocations must be returned by Dec. 31 because the Legislature did not authorize it to be spent. Danny Moran, spokesman for Oregon House Speaker Tina Kotek, said those funds were restricted to addressing additional costs to election offices caused by the coronavirus, and required a 20% state match. Chiapella said the funds could not have been used to replace the antiquated Oregon Centralized Voter Registration system.

Microsoft no longer supports the Windows Server 2008 system that it operates on, Trout and county election officials said. There is also no multifactor identification to protect it from hackers.

To Druckenmiller, the most critical security issue is “the vulnerability of running on software that is no longer even supported.”

“I wouldn’t do that even on my home laptop and multifactor identification is a no brainer,” he said.

The secretary of state’s office was going to take bids — known as a request for proposal, or RFP — in October for a new voter registration system, but Clarno paused it without consulting with the county clerks or Trout, the ousted election director said.

“We went through a lot of work to develop an RFP and then to have the secretary pull the plug on that, and then not even mention it to us,” Robinson said. “We were led to believe that there was going to be an RFP going out because there was some funding to help with it. And then, nothing.”

Chiapella told AP the project management team raised numerous red flags that required the agency to slow down and ensure a successful procurement process and outcome.

Trout said the delay was apparently caused because the purchasing team could not meet a timeline even though the team had been provided with funds for a full-time employee to work exclusively on the request for proposal.

“The person did not work exclusively on the RFP which means federal funds were inappropriately used and may need to be returned after an audit,” Trout said.

Chiapella denied any wrongdoing, saying time not spent on the project is not charged to federal funds.

There have been numerous secretaries of state in recent years, and that did not help the situation, county election officials noted.

Of the six other projects that Richardson had intended to use $3.2 million in federal funds in 2018 for, only one was accomplished: the hiring of two internet technology security staffers, Trout said, adding that he’s seen no benefit from hiring the staffers, who are under the secretary of state’s internet technology department, as is the state elections office.