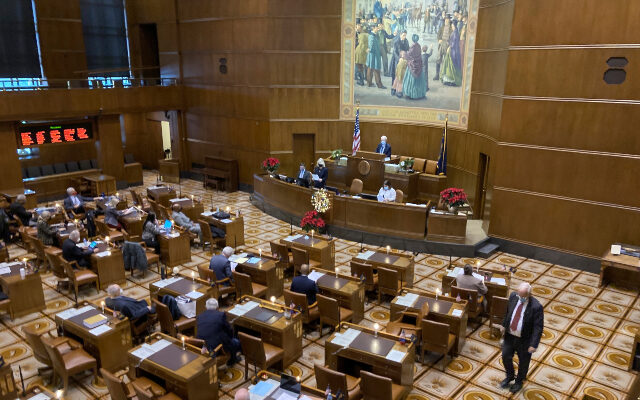 Members of the Oregon Senate meet Dec. 13, 2021, during a special session of the Legislature, in Salem, Ore. (AP Photo/Andrew Selsky, File)

SALEM, Ore. (AP) — Democrats in the Oregon House have reintroduced a bill that would send one-time, $600 payments to the bank accounts of more than a quarter-million state residents.

Oregon Public Broadcasting reports it marks the revival of a proposal Democrats in control of the Legislature floated in the past: providing stimulus checks to essential workers who remained on the job throughout the COVID-19 pandemic.

This iteration of the plan, revealed Tuesday, would focus efforts on around 260,000 people who filed for earned income tax credits — a break for low- and middle-income families — on their 2020 filings.

Rep. Andrea Valderrama, a Democrat from East Portland, is one of the chief sponsors of the bill.

Valderrama said proponents shelved an earlier version of the plan for a couple of key reasons.

First, the original bill created a process for low-income workers to apply for payments. Valderrama said lawmakers were uneasy about the prospect of finding a state agency or third-party vendor that could handle that volume of work in a timely manner.

Secondly, the new bill doesn’t discriminate between what types of workers would be eligible for these payments. The original plan would have only qualified certain types of workers, a factor that lawmakers and proponents realized might preclude many who still need these payments and has been a cumbersome task to delineate who was eligible.

Under the new proposal, as long as they applied for the earned income tax credit on their 2020 state filing, taxpayers would receive a check.