Only Survivor Of Stabbing On MAX Testifies 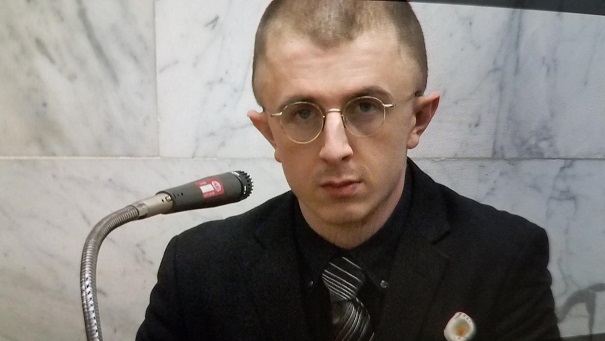 PORTLAND, Ore.–Micha Fletcher was the third person to take the stand in the Jeremy Christian MAX stabbing murder trial now in day 6 in Multnomah County court.  Fletcher now 24 years old is a carpenter by trade.  Fletcher has been on the Autism Spectrum since he was a child. it takes a lot for him to concentrate and focus.  The first time Fletcher saw Jeremy Christian was at a Freedom of Speech Rally in the Montevilla Neighborhood in April of 2017.  He described him as loud.  They had no further contact that day.

He recounts he was headed to work at Stark Street Pizza  from PSU riding the Green Line Train.  He noticed Christian when he started yelling about Saudi Arabia and getting the “F” out of America. Fletcher could hear him over the music he was listening to through  his headphones.  The he noticed the man with the ponytail yelling at 2 young dark skinned women .   He described Christian as very very angry. One of the teens was the only person on the train with  hijab.  There was more yelling Fletcher said,” people reacted with fear and apathy.”  Fletcher moved to protect Talishan Namkai Meche who he thought was not prepared to handle  violent altercation. He cared about Meche getting hurt.  He yelled at Jeremy Christian so he would get off the train. fletcher shoved him a couple of times. Fletcher testified he never saw Ricky Best of Talishan Namkai Meche get stabbed.  He himself thought Jeremy Christian was going to kill him.  He thought he was punched and not stabbed.  the turning  point came when he noticed blood coming from his neck.  He crouched down and left the train for the platform.  He yelled for someone to help him.   He put as much pressure as he could on his neck. he spent 4 days in the hospital after surgery.  He did several months of physical therapy.  His jack was broken in the knife attack.