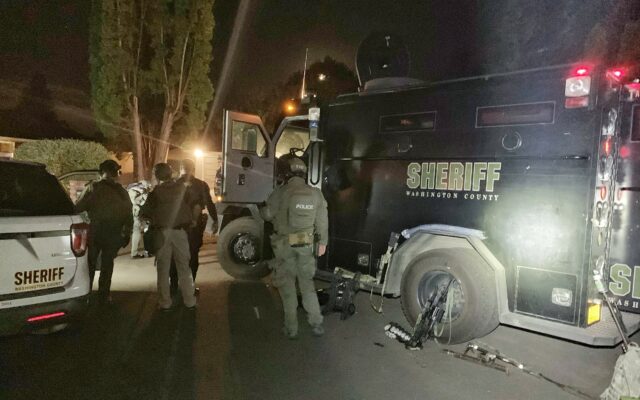 Saturday night around 10 p.m., Washington County Deputies responded to a neighbor dispute near Cascadia Street and Cascadia Court in Aloha.

The caller told officers that his neighbor 39 year old Breck Carter was on his property after deputies say he was trespassing the day before.

Around 10:30 pm deputies made it to the property and tried to make contact with Carter.

Deputies say when Carter saw them, he ran inside his home and allegedly pulled out a gun and pointed through a window when deputies knocked on his door.

In a press release the Multnomah County Sheriff’s office say they then backed away and tried to contain the home while waiting for negotiation teams to arrive.

Around 10:40 pm a deputy outside Carters’ home says he saw Carter allegedly point a gun at him through a window.

The deputy shot through the window at Carter, however no one was struck by the bullet.

According to a press release “Crisis Negotiators were able to contact Mr. Carter, and he was taken into custody at 12:53 am. Deputies transported Mr. Carter to a local hospital for treatment for an unrelated injury. Mr. Carter was lodged at the Washington County Jail on several charges”