Nora Is Back At The Oregon Zoo 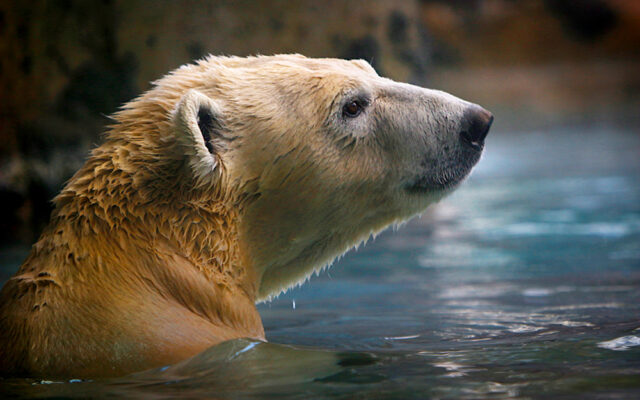 PORTLAND, Ore. – Nora is officially back in Portland.

After spending 2016 and 2017 at the Oregon Zoo, the 5-year-old polar bear has most recently lived in Utah’s Hogle Zoo.

Visitors can see her in the brand new Polar Passage habitat in April.

Here’s more from the Oregon Zoo:

PORTLAND, Ore. — Nora is back! After spending the past few years at Utah’s Hogle Zoo, the 5-year-old polar bear returned to the Oregon Zoo late yesterday and is settling in behind the scenes as the zoo puts the finishing touches on its new Polar Passage habitat.

“Seeing Nora this morning was so exciting,” said Nicole Nicassio-Hiskey, the zoo’s senior marine life keeper, who worked closely with the young bear during her previous time in Portland. “She has grown into a beautiful bear. Her coat looks great and she seems very comfortable already — she has been taking dips and splashing around.”

Nora, who lived here for close to a year in 2016 and 2017, will remain off-view during a brief acclimation period. Oregon Zoo visitors can expect to see her at Polar Passage in April.

“The entire team is super excited to have her back,” Nicassio-Hiskey said. “We can’t wait to see her explore her amazing new habitat.”

Veterinarians at the Hogle Zoo and Oregon Zoo have been in close contact to discuss some of Nora’s special needs. The 500-pound bear had metabolic bone disease as a cub, and she injured her leg in 2019, requiring surgery. While vets say she has healed well, Nora has permanent skeletal structural issues that give her an unusual gait and will require special management throughout her lifetime.

Nora was born Nov. 6, 2015, at the Columbus Zoo and Aquarium, and — when her mother began leaving her unattended in the den for prolonged periods of time —Columbus caregivers made the difficult but necessary decision to step in and hand-rear the tiny cub, feeding her from a bottle until she was old enough to eat on her own.

She came to Portland in September 2016, briefly spending time with the Oregon Zoo’s geriatric polar bear Tasul, before moving to the Hogle Zoo, where caregivers introduced her to Hope, another female bear who is the same age as her.

Hope moved from Hogle to Chicago’s Brookfield Zoo last month on a recommendation from the Association of Zoos and Aquariums’ Species Survival Plan for polar bears — a cooperative program that helps maintain a genetically diverse, self-sustaining population to guarantee the long-term future of these animals. Another female polar bear will join Nora at Polar Passage this fall.

In the meantime, Nora and her Oregon Zoo keeper staff can get reacquainted and familiar with the new habitat, which was conceived partly with her in mind.

Polar Passage, set to open next month, is one of eight major projects made possible by the community-supported zoo bond measure passed in 2008. The final three projects — improved habitats for primates, rhinos and polar bears — are all set to open this year.

Many of the features at Polar Passage were funded through the Oregon Zoo Foundation’s $8.5 million Heart of the Oregon Zoo campaign, which supports zoo’s animal welfare, conservation and education efforts. To learn more or to make a gift, call 503-220-2493 or email [email protected].

To see a video about the new habitat, go to bit.ly/PolarPassage. To learn more about Nora’s story, go to bit.ly/SecondChanceNora.

As climate change reduces Arctic sea ice, polar bears struggle to find and catch seals, making it harder for them and their cubs to survive. The species is classified as threatened under the U.S. Endangered Species Act, and the International Union for the Conservation of Nature’s Species Survival Commission has designated the species as facing a high risk of global extinction.

The zoo is working with Polar Bears International, the U.S. Geological Survey and other partners on projects that will shed new light on how climate change is affecting polar bears in the Arctic. In 2011, Oregon Zoo polar bears became the first in the world to participate in voluntary blood draws — a significant advance that improves animal welfare, especially during veterinary treatment. Since then, the zoo has helped USGS researchers study how climate change is affecting the diets of wild polar bears and develop methods to remotely investigate how these predators are responding to the retreat of sea ice.

The Oregon Zoo Foundation is leading efforts to fund critical needs of the zoo during its limited-capacity reopening. To contribute, go to oregonzoo.org/donate. Members, donors and corporate and foundation partners help the zoo make a difference across the region and around the world.