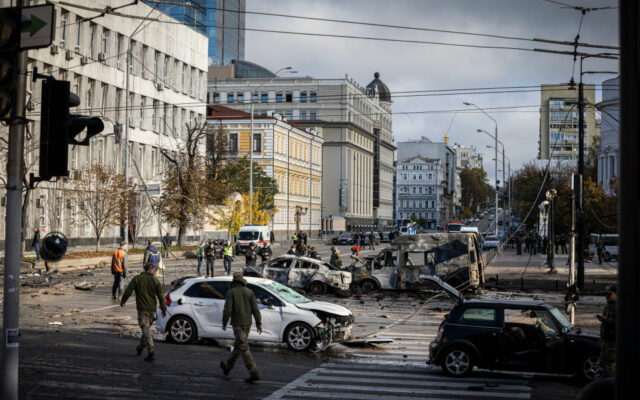 KYIV, UKRAINE - OCTOBER 10: Emergency service personnel attend to the site of a blast on October 10, 2022 in Kyiv, Ukraine. This morning's explosions, which came shortly after 8:00 local time, were the largest such attacks in the capital in months. (Photo by Ed Ram/Getty Images)

KYIV, Ukraine (AP)- A second round of air raid sirens rang across Kyiv on Monday afternoon, sending many across the city back underground into shelters following missile strikes earlier in the day.
Missile strikes across Ukraine on Monday morning marked the biggest and most widespread Russian attacks in months.
Veniamin Kofanov, 23, was coming out of a grocery store in a mall with a pizza box when the alerts started again in the afternoon. Originally from the eastern region of Luhansk that Russia annexed last month, Kofanov said the attacks were worrying but would not dampen Ukrainians’ resolve to fight.
He said he viewed Putin’s claim that the attacks were in retaliation for the strike on the Crimean bridge as a sign of the Russian leader’s desperation.
“He’s looking more like what Hitler was like in his last days,” Kofanov said. “He is just in shock about the bridge and the fact that it happen on his birthday.”
Putin celebrated his 70th birthday a day before the attack on the bridge linking Crimean peninsula with the Russian mainland.