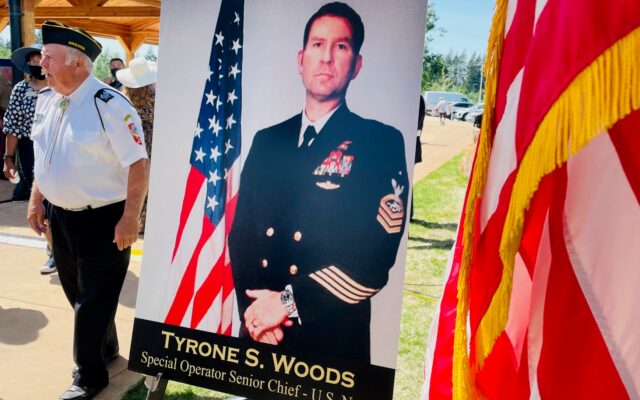 Oregon City, Ore. — The Tyrone S. Woods Memorial Park Dedication Event was held Saturday. The event was a commemoration of courage, sacrifice, and patriotism which officially opened the park and unveiled a granite memorial in Wood’s honor.

Mayor Rachel Lyles Smith said, “The City’s 2.6-million-dollar investment into this park affirms the City Commission’s goal to invest in capital needs that support safe and sustainable infrastructure, and to protect and preserve our environmental health and natural resources.” The 9-acre park was envisioned by the Oregon City Community who advocated that the park be accessible to all ages and abilities. The park includes site amenities including winding looped pathways, open lawn areas, a picnic shelter, benches, a nature playground, and a fenced off-leash dog park. Subsequent phases are planned to include pickleball courts and skate amenities.

The park is named after Tyrone Snowden Woods, who was a native Oregonian and a 1989 graduate of Oregon City High School. He was a state champion wrestler and went on to serve his country as a US Navy SEAL. Woods perished in Benghazi on September 12, 2012, while serving with the CIA defending American lives.

Lyles Smith went on to say, “Dedicating this park after Tyrone S. Woods keeps his legacy alive. It helps share that belief in our country is solemn and having big hopes and dreams – like becoming a Navy SEAL – can be achieved. Tyrone is our hometown hero.”

The Oregon City Veteran of Foreign Wars (VFW) Post 1324 raised $36,000 for the design, fabrication, installation, and maintenance of a permanent stone memorial, flagpole, and lighting at the park. DJ Ruger, representative of the VFW said, “Early on our members got behind naming the park for Tyrone, networked and secured more than 8,000 votes. The VFW then committed to placing a flagpole and permanent memorial in the park. We are here today to dedicate that memorial on behalf of our Post.”

Tyrone’s mother, Cheryl Bennett, graciously thanked all involved who brought the park to fruition. She acknowledged that many families have lost loved ones in the line of duty and hoped that this park and memorial would be a place of honor and reverence.