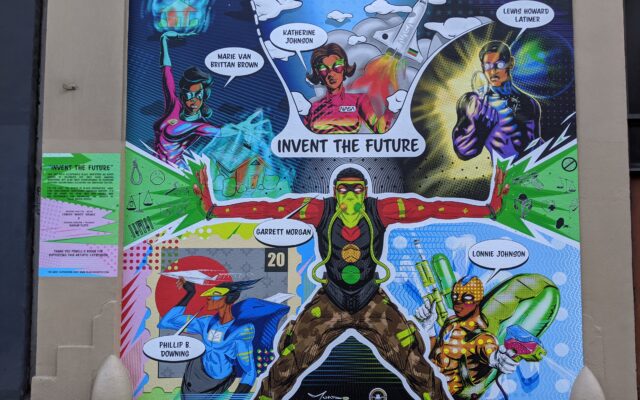 PORTLAND, Ore. — There’s a new mural on the wall of Powell’s Books flagship store on West Burnside. It’s called “Invent the Future,” and features six “super heroes.” But these are not typical super heroes like Batman or Wonder Woman. These are real people who are responsible for some common inventions many of us use every day.

The mural is the brainchild of Northeast Portland Creative, Rashad Floyd. His company, Heart and Hustle Productions was tapped by Emily Powell herself to fill the blank space on the wall. She told Floyd she wanted whatever they came up with to help represent her company’s support for the Black Lives Matter movement.

Floyd tells KXL’s Mary Loos he wanted to feature these inventors to get away from the obvious, and introduce people whose accomplishments may not be common knowledge. “Because there’s a lot of our society, a lot of our kids, a lot of adults quite frankly, who don’t know the significant impact that Black Americans have had on our society from an invention and innovation standpoint.”

He enlisted the help of artist, Edmund “Mundo” Holmes to bring his vision to life. He hopes people who stop by to see the work will take the time to look up the famous names and learn more about them.

The six inventors featured are as follows:

Garrett Morgan – Inventor of the traffic light and the gas mask

Phillip B. Downing – He holds the patent on the modern day mailbox

Katherine Johnson – Many will know her from the movie “Hidden Figures.” She was a NASA mathematician who worked on the lunar launch program

You can see the mural outside Powell’s Books along West Burnside between 9th and 10th.