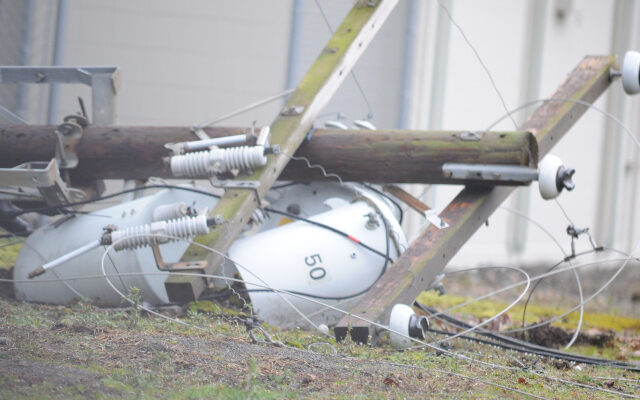 PORTLAND, Ore. — Two weeks after the worst storm in 40 years, nearly all power has been restored.  Under 1,000 PGE customers are without electricity as of Thursday morning.  More than 675,000 homes and businesses lost power during the historic snow, ice and wind storm.

The extent of the damage significantly slowed the progress of PGE crews in getting the electricity back on for everyone.  Many folks were without power for well over a week.

Portland General Electric CEO Maria Pope said Monday that the repairs at that stage were only bringing about 10 customers back online at a time and there were still about 5,000 repairs needed system wide.

It was a long haul for utility crews and the hundreds of thousands of customers affected.  Crews worked as long as 36 hours straight to repair equipment around-the-clock.  About 3,000 people worked to restore power.

Ice building up on power lines and trees falling into wires were the biggest problems.  The utility says “extremely dangerous conditions” kept crews out of the hardest hit areas for the first 48 hours of the storm.  They prioritized public safety and infrastructure repairs over residential areas and say the ever-changing conditions forced them to even further prioritize their restoration efforts.

PGE says this was the worst storm the area has seen in 40 years and call the damage “unprecedented and historic”, ten times as bad as the winds and wildfires early last September.

Over 40 transmission lines and 400 miles of lines were repaired with over 792,000 feet of new wire or cable strung.  There were more than 11,650 downed wires and extensive damage to 20 substations and 245 distribution feeders.

Pacific Power restored service to all of its customers last weekend, completing restoration efforts in the mid-Willamette Valley.  The utility had upwards of 80,000 customers without power in the aftermath of the storms.  More than 400 crew members and contractors from other regional utilities worked 24/7 to restore power.