Nearly 75 Years Since The First A-Bomb…We Have This… 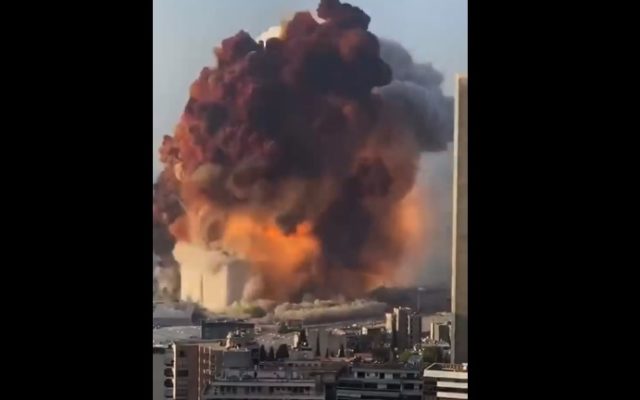 I’ve seen many images and videos of explosions in my time on earth, but I’ve never seen anything quite like this in our modern time;

That’s the massive blast that rocked a part of Beirut, Lebanon earlier today.

When I first saw the images of the blast, I was shocked, but then when I saw the smoke plume, my jaw hit the floor.

My mind flashes to the black and white images of the tall, thick smoke plume left behind when the first U.S. A-bomb went off in Hiroshima, Japan.

All that is speculation, of course.

Here’s the latest from the Associated Press;

BEIRUT (AP) – Lebanon’s health minister says more than 25 people were killed and over 2,500 were injured in the huge explosion that rocked Beirut.

The blast flattened much of the the city’s port, damaging buildings across the capital and sending a giant mushroom cloud into the sky.

A civil defense official said his men had evacuated dozens to hospitals and that there were still bodies under debris. The cause of the blast was not immediately known. An Israeli government official says Israel “had nothing to do” with it.

The blast was stunning even for a city that has seen civil war, suicide bombings and bombardment by Israel. It could be heard and felt as far away as Cyprus, across the Mediterranean.