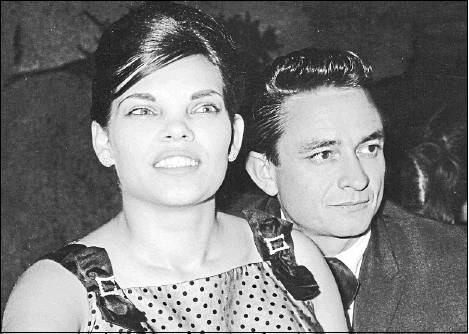 In Brief: The story of rock and country music legend Johnny Cash’s first wife Vivian is incredible. This documentary is told through the memories of their four daughters and is one of this year’s best movies.

I didn’t want to review this movie. The producers and the studios sent me bunches of invitations to screen Vivian Cash’s story. I declined them all. One producer, Dustin Tittle contacted me personally and asked me to check it out. He’s related to Vivian’s daughter Tara Cash Schwoebel. Tittle told me Tara lived in the Portland area, was in the movie a lot and wanted to know if I’d watch the movie and interview her. I did both and now I can’t thank him enough. At the end of this review there is a link to my interview with Tara.

Most of us connect rock and country music legend Johnny Cash to June Carter Cash. She’s Cash’s second wife and — considering her status in country music royalty — Carter Cash got all the marital publicity.

The “my darling” in the movie’s title is Vivian. She’s Cash’s first wife and the mother of their four daughters. The title comes from lines written by Cash in the bunches of letters he sent to Vivian when he was in the army and before they were married. Some come from letters done on the road early in his career.

The documentary My Darling Vivian is about her life, their marriage, their divorce, and her life after the divorce.

With no narrator, Vivian’s story is told via pictures and video, and from interviews with their four daughters Rosanne, Tara, Kathy and Cindy. Rosanne you know from her fame as a singer. She’s the oldest and the only known entity of the group.

Vivian and Johnny’s four daughters are exceptional storytellers. You’ll smile, laugh, frown and be totally appalled at times. Much credit for how you immediately get hooked on Vivian’s story also goes to director Matt Riddlehoover.

Like the four daughters, he — also — is an exceptional storyteller and brilliantly weaves Vivian’s story together.

And that story is sad. It is also compelling. The deeper you get into her life and what happened to her, their marriage and their children, the more fascinating that story becomes.

Her personality was not one that sought the limelight. She also didn’t want to be ignored and forgotten like an old doll tossed out with a housecleaning. But as the documentary shows, and her daughters attest, that’s exactly what happened. Yet through it all Vivian, hurt as she was, was gracious and kept the hurt to herself.

That’s part of her beauty and the beauty of her story.

Best of all, the movie is not a total whine-fest. Vivian’s story has lots and lots of ups as her four daughters vividly describe her personality, sense of humor and love of life. In the film’s 90 or so minutes, I fell in love with her and with her children.

But like all lives, Vivian’s is not often pretty. Several scenes in Riddlehoover’s movie are shocking. The one that angered me the most is when Vivian — who admittedly loved Johnny with all her heart all of her adult life — is sitting in the audience of the TV network tribute to Cash after his death.

There’s no mention of her at all and plenty of buzz for Carter Cash.   The one time she is spoken about is when Rodney Crowell — Rosanne’s ex — comes to the microphone, points her out and praises her involvement in Cash’s life. What’s shocking is that the network cut his comment out of the telecast. That’s the kind of thing Vivian endured during, and for most of her post Johnny life.

The film often mentions the Johnny Cash biopic, Walk the Line. It doesn’t exactly portray Vivian in a positive light. And it is the movie that leads to another sort of a slight against her legacy. When I was doing more research on the movie and grabbing information from Internet Movie Data Base (IMDB), I was shocked at how the site set the cast list for My Darling Vivian.

Reese Witherspoon and Joaquin Phoenix — who played Johnny and June Carter Cash in the movie Walk the Line — are listed first. Scroll down and Johnny is 16. June is listed 21st. Vivian is number 34 on the list.

The four daughters who basically narrate the movie are found below Vivian. Rosanne is 39th, Tara got placed in slot 40, Kathy is 41st and Cindy number 43. Wow. How does that happen?

Somehow it kind of fits the movie’s point that Vivian — who inspired and supported Cash’s early superstardom — was always in second fiddle. But what you find in this movie is a story of an incredible woman who just happened to be married to a superstar. Vivian raised four very lovely and loyal daughters who felt — deeply — that her story needed told.

And they told it very, very well.

Early on My Darling Vivian is a fascinating look at the early history of a rock and roll and modern country music legend. Then it evolves into how fame has its downside. Later, it looks intently at a wonderful, smart, fun and funny woman who endured much and did so with dignity and grace.

I always loved and respected Johnny Cash. While most of us knew about his drug addiction and struggles on the road, this movie shows a more human side of the man in black. And while it’s obvious that Vivian and Johnny’s daughters love their dad, they’re in absolute awe of their mother.

Click here to hear my interview with Tara Cash Schwoebel.

A beautiful story lovingly told by four equally beautiful daughters. One of my favorite movies of the year. You can’t help but love this movie, Vivian and Rosanne, Kathy, Cindy and Tara. I know I did. Give this one a 5 on the Friday Flicks with Gary 0 to 5 scale.

You can find My Darling Vivian on Amazon Prime and on the movie streaming sources of some theaters. In the Portland, Oregon area that is the Clinton Street Theater and the Hollywood Theater.