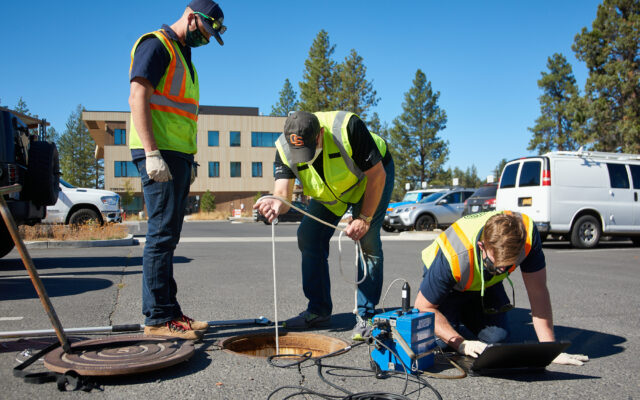 CORVALLIS, Ore. – COVID-19 is mutating across the state.

Oregon State University researchers from the Center for Genome Research and Biocomputing have recently found the highly contagious U-K variant in wastewater testing in Bend.

The L452R strain has recently been associated with several large outbreaks in California.

CORVALLIS, Ore. — Genetic sequencing of COVID-19 samples done by Oregon State University’s Center for Genome Research and Biocomputing has detected multiple variants of the SARS-CoV-2 virus that causes COVID-19 in samples from around the state, including the highly contagious U.K. strain in one sample from Bend, Oregon.

The Bend wastewater sample was obtained Dec. 22 and sequencing conducted by OSU revealed the U.K. strain on Jan. 21. Bend is one of several locations throughout the state where OSU’s TRACE Community project conducts wastewater testing, which is funded in part by the Oregon Health Authority (OHA).

“OHA is working quickly with the Centers for Disease Control and Prevention, and partners statewide to build COVID-19 sequencing surveillance to track the evolution of virus mutations over time. All viruses mutate and these variants are not unexpected,” said Dr. Melissa Sutton, OHA medical director of respiratory viral pathogens. “We will see COVID-19 variants rise and fall in abundance through our population over time and the rise of a new variant is not necessarily cause for alarm. However, monitoring variants is critical to our understanding of disease transmission, disease severity, the ability to evade testing, vaccine effectiveness and treatment resistance.”

As a partner in OSU’s TRACE project, since last spring, the university’s Center for Genome Research and Biocomputing has been running genetic sequencing on all positive COVID-19 samples obtained from TRACE testing of individuals and wastewater from OSU campuses and Oregon communities.

In recent weeks, researchers at the center have been particularly alert to identifying any evidence of variants of SARS-CoV-2, most notably the U.K, South African and Brazilian variants that have been shown to be more contagious than common variants of the virus. Those three variants have a mutation in the virus’ spike protein that may allow individual particles of the virus to latch onto a person’s cells more effectively.

“With the new variants arriving, being able to understand which variants are circulating among communities is becoming increasingly more important,” said Brett Tyler, director of the genome center.

The Centers for Disease Control and Prevention has ramped up its monitoring of mutant stains nationwide, as agency experts are concerned that the mutant strains could eventually evade the vaccine currently being distributed, especially if there are delays in giving people the second vaccine dose needed to achieve strong immunity. And because the current mutants from the U.K., South Africa and Brazil are much more contagious and thus spread faster, contact tracing for any mutant COVID-19 cases will need to be swift to prevent further spread.

Five individuals tested on OSU’s Corvallis campus were positive for the “L452R” mutant strain of COVID-19. The strain was also present in campus wastewater samples.

“This strain is not of the highest concern, like those other three (U.K, South African and Brazilian variants), but it has spread extensively in Southern California and was associated with some recent large outbreaks in Santa Clara County,” Tyler said.

The L452R variant first showed up last March. It does not have the mutation in the spike protein that makes the other variants so worrisome, but laboratory tests showed that its mutation may reduce antibody binding, which could affect the efficacy of the COVID-19 vaccine, though it’s unclear how closely the lab tests will mimic real-world infections.

“Normally when you vaccinate people, they generate a lot of different antibodies against the spike protein. The fact that one particular antibody might not bind as well — we’re somewhat concerned about this strain, but it’s not as concerning as the U.K., South African and Brazilian strains,” Tyler said. “But we do want to keep a close eye on it.”

There are two sub-types of the L452R strain, and both were detected in the samples analyzed by OSU, he said. The strains were also detected in wastewater from Albany, Forest Grove, Klamath Falls, Lincoln City and Silverton.

“It is not surprising that we have detected this strain,” Tyler said. “Since L452R has been around a long time, and is currently widespread in California, it stands to reason that it would likely find its way up here. But it does indicate the importance of the sequencing to keep track of it.”

As the country moves into the vaccination phase of the pandemic, knowing exactly which viral strains are circulating will become more important, as they could impact the vaccine’s effectiveness, said Tyler Radniecki, an OSU associate professor of engineering and the lead on TRACE’s wastewater sampling.

“The wider the pandemic gets, the more genetic variation we see in the virus, and some variations in this phase of the pandemic may well matter,” Radniecki said.

“The wastewater sampling is particularly powerful because of its broad scope,” Tyler said. “Each sample represents a survey of an entire community, or subsection of a community, which is much more cost-effective than testing people one by one.”

OHA will partner with OSU to expand its wastewater surveillance to every county statewide, Radniecki said. All of these sites’ samples will be sequenced weekly.

All three staff members at the Center for Genomic Research and Biocomputing’s lab facility, plus a bioinformaticist, are working on the COVID-19 sequencing. The lab has the equipment capacity to roughly double or triple its sequencing results but would require more staff.

The collection, testing and sequencing of SARS-CoV-2 samples from Oregon communities has been paid for by OSU, the David and Lucile Packard Foundation, PacificSource Health Plans, the Oregon Health Authority and the National Science Foundation.