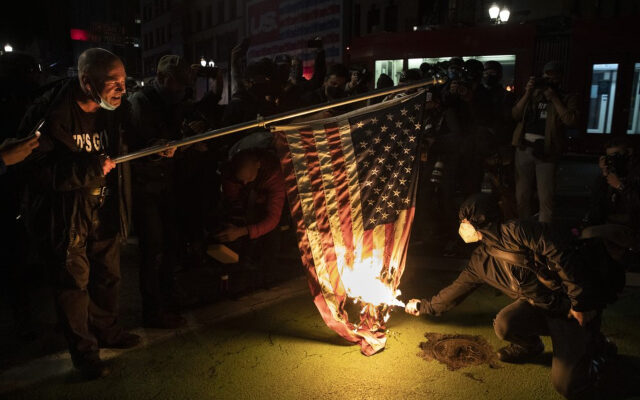 Multnomah county, Ore. – (Update) Today, Multnomah County District Attorney Mike Schmidt is providing an update on the cases submitted for prosecution screening after law enforcement declared a riot in downtown on November 4, 2020 and made multiple arrests.

Harrah is charged with one count of criminal mischief in the first degree and two counts of criminal mischief in the second degree. Harrah is accused of breaking two windows, estimated to be 5-feet x 7-feet in size, at the Pioneer Courthouse Square Starbucks. During a police interview, Harrah told detectives that he is a traveling protester and had only been in Portland a few days, according to court documents.

DeFerrari, from Sunrise, Florida, is charged with one count of riot and two counts of criminal mischief in the second degree. DeFerrari is accused of breaking two windows of local businesses using a black hammer that was inside his backpack.

Four (4) of the 13 cases referred to the district attorney’s office were referred back to the arresting agency for investigative follow up. These cases remain under investigation. It is our responsibility to not make a premature criminal charging decision based on potentially incomplete information. Upon the completion of the requested investigative follow up, any case re-submitted will be re-reviewed.

The district attorney’s office rejected four (4) of the 13 cases in practice with the office policy announced by DA Schmidt on August 11, 2020. All four rejected cases involved individuals being arrested at a parking garage in downtown and charged with a single count of trespassing in the second degree, a Class C misdemeanor.

Three (3) of the 13 cases referred to the district attorney’s office resulted in a “no complaint” being filed with the court because no police reports were received. All three cases, which were submitted as misdemeanors, will be reviewed once the police reports are received.

It is important to note: Our office continues to work with law enforcement to identify and investigate any criminal conduct that occurred during past mass demonstrations. This conduct includes assaults and property damage that have been recorded and posted online.

No additional information can be released by the Multnomah County District Attorney’s Office at this time.

A charging document is only an accusation of a crime. Harrah and DeFerrari are innocent unless and until proven guilty.

District Attorney Mike Schmidt released a statement today about the riot in Portland last night. He says in part, the destruction at local businesses including a clothing store founded and ran by women, and a church that gives healing and shelter to homeless, is unacceptable and criminal. He goes on to add, that he is fully committed to prosecuting the people who engage in this conduct, and will work with law enforcement partners to hold them accountable.

But D.A. Schmidt has recently come under fire by some of those officials, after he has previously declined to prosecute hundreds of demonstrators that have been arrested recently in Portland.

“When we stand up against injustice in our community we do so with an unwavering expectation that our businesses and critical service providers will not be targeted with property damage and that people can gather without fear of physical violence.”

“What we saw last night – the destruction of property at multiple businesses including at a female founded and women run local clothing store, at a church that provides healing and shelter, clothing, food and assistance to homeless individuals and people overcoming substance abuse and addiction and at a hotel that is committed to the revitalization of Old Town Chinatown — is unacceptable and criminal.”

“My office rejects all forms of violence and property destruction. We are fully committed to prosecuting those individuals who engage in this conduct. We will work in partnership with law enforcement to develop cases by identifying suspects and evidence that can be used in court to ensure accountability for criminal acts occurring in our community.”

“We will always support those who participate in demonstrations absent of behavior that promotes and inflicts harm because such conduct diminishes our shared objectives of creating a stronger, healthier and more equitable community.”