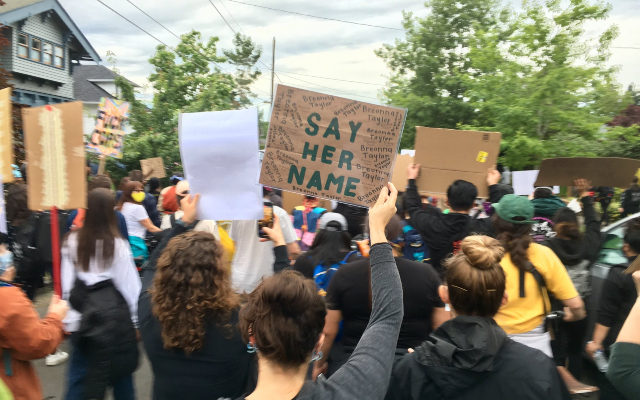 PORTLAND, Ore. — Several groups of protesters gathered in Portland on Sunday evening for an 18th night of demonstrations following the death of George Floyd in the custody of Minneapolis Police.  14 people were arrested.

A few thousand gathered at Jefferson High School in North Portland and marched to Alberta Park around 6:00pm where they assembled for several hours.

A group of motorcycle riders shut down Interstate 5 southbound on the upper deck of the Fremont Bridge around 7:15pm before dispersing on their own.

More than 100 people gathered behind the fenced area near the Justice Center at Southwest 3rd and Main.  Police say projectiles including an incendiary device that appeared to be a commercial grade firework and glass bottles were thrown at them.

Shortly after 9pm Sunday, PPB officers arrested a person who was trespassing inside the fenced area at the Justice Center. Projectiles were thrown at officers, including what’s believed to be a commercial grade firework. The explosion could have seriously injured those nearby. pic.twitter.com/RGSwN2gpWO

People climbed on the fence and one person breached the perimeter.  They were arrested around 9:00pm after refusing orders to leave the enclosed area.

Police announced there was a civil disturbance and declared an unlawful assembly due to unsafe criminal activity.

The crowd then dispersed from the area, but did not leave the boundaries of the closure that was in effect.  They gathered in several areas of downtown and blocked streets.  Arrests were made as officers again attempted to disperse the protesters, including a splinter group near Southwest 10th and Taylor Street.

The downtown area was mostly clear of protesters by 1:00am.