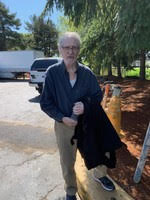 UPDATE:  On Friday, May 1, 2020, Portland Police Bureau officers found Mr. Swearingen.  He was found safe near the Eastmoreland Golf Course.

He is thought to of gone missing between 10 PM last night and 6 AM this(Friday) morning while his caretaker was asleep.

Officers say he is most likely wearing khaki pants, a dark sweater and a dark blue jacket.

Officers are asking anyone with information on Mr. Swearingen’s whereabouts to call non-emergency dispatch at 503-629-0111.