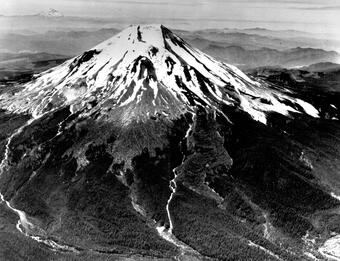 A new study by Oregon State University takes a look at the impact melting ice plates could have on volcanoes.  We care of course here in the Northwest because we’re surround by volcanoes!    The study examines what happens once the immense weight of ice plates disappears.  Will that set the earth off balance?    There’s no definitive answer yet, but OSU’s study is worth a read.   Professor Alan Mix says they’re going to keep digging into this to see what impact it could have on Oregon and Washington.

LISTEN to the story here:

Here’s the information from OSU:

CORVALLIS, Ore. –  A chemical analysis of sediment cores from the North Pacific Ocean show a consistent pairing of volcanic ash and hypoxia, a low ocean oxygen interval spanning thousands of years, during times of rapid climate warming at the end of the last ice age, new research shows.

Understanding the relationship between volcanic activity, hypoxia and ice melt due to warming temperatures during the last ice age, which ended about 18,000 years ago, raises important questions about what might occur as the planet warms today.

“It is unknown right now whether volcanic eruptions will increase as the climate warms,” said the study’s lead author, Jianghui Du of ETH Zurich in Switzerland, who conducted the research as a doctoral student at Oregon State University’s College of Earth, Ocean, and Atmospheric Sciences.

“But we know that the remaining glaciers on volcanoes in the Pacific Ocean ring of fire are melting fast, and it will be important to include this ice loss in predictions of future eruptions, which would be risky for populated regions and could also make emerging hypoxic dead zones in the North Pacific worse.”

The study was published today in the journal Nature. The findings point to a systematic relationship between climate, glacier retreat, volcanic activity, biological productivity and deoxygenation of the ocean, said Alan Mix, an oceanographer and paleoclimatologist at Oregon State and a co-author of the paper.

“These surprising linkages between parts of the Earth we usually think of as separate highlight how interconnected the whole system really is,” he said. “Solving environmental problems, such as those we face in the ongoing climate crisis, demands that we look with open minds at the whole linked system and not just at isolated parts.”

The volcanic region in the Pacific Ocean is known as the ring of fire in part because it is one of the most active tectonic and volcanic regions of the world.

The timing of volcanic events in relation to the retreat of the Cordilleran Ice Sheet, which once covered large portions of western North America, suggests that the rapid melting of ice covering volcanoes in the region induced increased volcanic activity, Mix said.

“Ice cover to volcanoes is like a cork in a champagne bottle. Remove the icy cork and boom, the eruptions begin,” he said.

Past research had shown a few ash layers in sediment in the region, but Du’s chemical study, using deep-sea sediment cores from the Gulf of Alaska, revealed more traces of ash that were not visible to the eye.

Co-authors from Texas A&M University, Christina Belanger and Sharon, who uses only one name, examined a species of seafloor organisms called foraminifera and found that they closely tracked the volcanic ash input from the Gulf of Alaska. These organisms thrive under highly productive waters and can tolerate low oxygen conditions.

“When the ash hits the ocean, the plant plankton gobble up that iron and bloom. This fertilization effect underscores a practical application of our work. Some have proposed fertilizing the North Pacific with iron to capture excess carbon dioxide from the atmosphere,” he said. “We show that the real world has effectively run that experiment in the past with volcanic iron, and the fertilization effect works and exports carbon to the deep sea. That’s good news. But there are some dangerous consequences because when that excess organic matter decomposes as it falls to the ocean depths, it consumes oxygen and creates dead zones.”