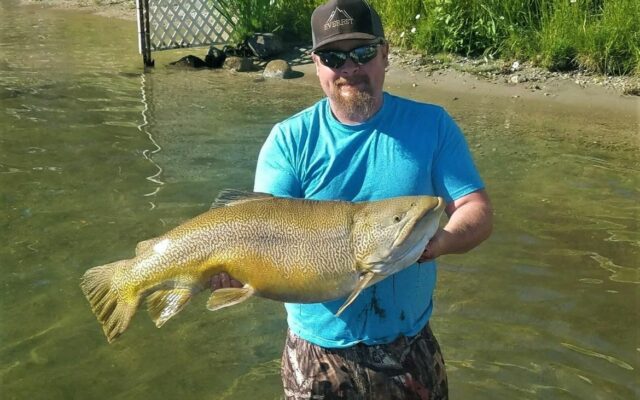 STEVENS COUNTY, Wash. — In what the Washington Department of Fish and Wildlife is calling a “massive” catch, a 24-pound tiger trout was pulled from Loon Lake by angler Caylun Peterson on June 26, shattering a state record.

The 24.49-pound trout caught in the Steven County lake broke the previous record by a full 6 pounds, according to Bruce Baker, an inland fish biologist with WDFW.

Peterson was fishing in the early morning in part to escape the hot weather, and it is a place he has gone to since he was a kid.

“They fight really good, they eat excellent, they’re just a blast to catch,” Peterson said of tiger trout, adding that they frequently grow quite large in the lake.

Before he was informed about the state record, Peterson had tried to let the fish go because he had thought how much more the fish would grow within a year.

Once the fish’s measurement was confirmed by the WDFW’s Spokane office, it was certified as the new state record.

The previous record was held by Kelly Flaherty, who caught an 18.49-pound tiger trout from Bonaparte Lake in Okanogan County in 2015.

As for what Peterson plans to do with his catch, it will be taxidermied. He plans to continue fishing, and as he has already been searching for his next big catch at Loon Lake.

WDFW said the lake has many types of fish, including about 85,000 kokanee in late spring.