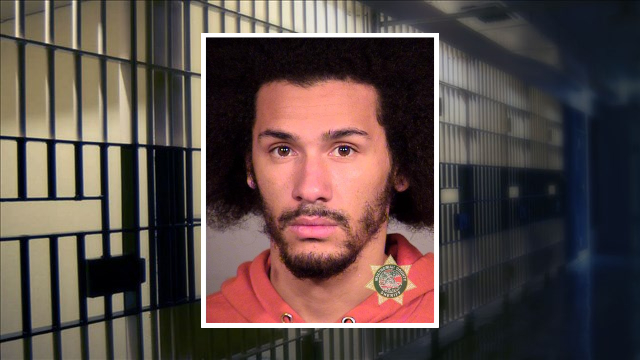 PORTLAND, Ore. — Three months after he was seen on video kicking a man in the head unconscious and seriously injuring him at a downtown Portland riot, 26-year-old Marquise Love was sentenced to 20 months in prison.  Love pleaded guilty on Monday to assault in the third degree and felony riot against Adam Haner.

Viral video made the rounds on social media in mid August showing Haner being surrounded by a volatile crowd, knocked to the ground where he was punched, kicked and bloodied before being knocked unconscious with Love’s violent kick.

The assault happened on the night of August 16th after Haner crashed his truck near a demonstration at Southwest Taylor and Broadway in downtown Portland.  The situation reportedly escalated when he came to the aid of a transgender woman who had some of her belongings stolen.  The crowd is also seen roughing up a female with the victim.

Disclaimer: We warn you the following videos show a violent assault and contains vulgar language.

Portland: A man accused of trying to run over protesters crashed his vehicle. BLM & Antifa militants then pull him from the car and violently assault him. pic.twitter.com/DiUbV9Mcy5

Court documents state that Love admitted that he was aided by another person as he physically injured the victim and that he and others engaged in tumultuous and violent conduct that created a grave risk of causing public alarm.

The Multnomah County District Attorney’s Office worked with all parties to reach a resolution without trial.

“The video of this assault is violent and shocking. It outraged our community and nation. We are fortunate that the victim’s injuries were not as severe as it first appeared they may have been,” said Multnomah County District Attorney Mike Schmidt. “In the days, weeks and months after this assault, detectives with the Portland Police Bureau worked quickly to identify the suspect and complete the investigation. This is a proper resolution. Marquise Love is accepting responsibility for his actions and the punishment.”

Love turned himself on August 21st.  The district attorney’s office says he expressed through his defense attorneys immediate regret.  In court Monday, he expressed genuine remorse and apologized to the victim and wished him a speedy recovery.

Love will be on probation for three years following his prison sentence and must participate in alcohol abuse treatment.

Police in an August 17th press release stated: “protesters chased a white Ford 4×4, which has crashed” at that location and “protesters drug him out of car”.  Another witness called police reporting that a mob of nine to ten people were “beating the guy”.

PPB Assault Detectives are actively investing this alarming assault. If anyone has information about this event please contact us. Public safety is up to all of us. https://t.co/A04MYkblc1

“Assaults will not be tolerated in our community. The videos recently posted to social media that show a person being violently pushed to the ground from behind and another person being kicked in the face are extremely concerning. The actions depicted in these videos are universally rejected as wrong – and the actions are illegal. I condemn this violence. Assaults on community members and police officers undermine everything our community is doing to bring meaningful and lasting change to the criminal justice system and beyond. My office is coordinating with law enforcement regarding their investigation into this type of assaultive behavior. Assaults and other violent crimes will be prosecuted when the evidence supports such action. If you have information on these or other crimes, please contact the Portland Police Bureau or Crime Stoppers of Oregon.”

The following videos show the moments before and after the assault.

TONIGHT: Here is what took place before the man crashed his car into a tree here in Downtown Portland

He then began to drive away to evade them pic.twitter.com/5oPev8Fiar

Here are the moments shortly after the man crashes due to BLM harassment and before they knock him out in Portland pic.twitter.com/JcrJ5w3ty8