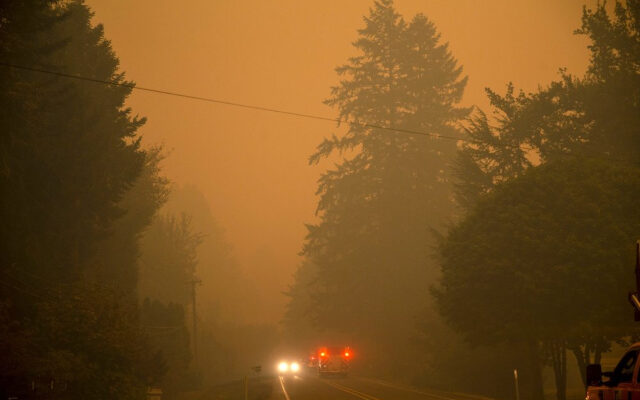 At 9 a.m. Friday September 25th, evacuation level changes take effect in Marion County. County leaders say the changes are coming after careful consultation with fire management officials, the Oregon Department of Transportation, Marion County Public Works, and other agencies.
The cities of Detroit, Idanha and the Elkhorn community along North Fork Road are reducing to a Level 2 – “Be Set” evacuation level.
While residents will be able to return to these communities, many hazards remain and core services have not been restored to residences.
The Oregon Department of Transportation is working with contractors to remove hazardous trees and debris along OR 22E between mile post 33, in Gates, and mile post 65, near Marion Forks. To allow residents access to the cities of Detroit and Idanha, ODOT says it will be using pilot cars to lead residents through the closed sections of OR 22E between Gates and Detroit. Residents may travel freely between Detroit and Idanha with OR 22E closed to eastbound traffic at mile post 56.2, west of Cooper’s Ridge Rd.

There is no through access to the Santiam Pass from the Detroit/Idanha area. Tree removal in the area between Gates and Detroit will cause delays for the inbound and outbound pilot car trips. Residents should expect at least one hour to make a one-way trip.

“As our residents return to the cities of Detroit and Idanha, we are asking the media and other visitors to be respectful of our community members during this difficult time,” said Detroit Mayor Jim Trett. “This will be the first time many of our residents are seeing the extent of the damage following the wildfires. Please allow our residents an opportunity to grieve these losses privately.”

In North Fork Rd / Elkhorn:
The North Fork Road corridor will be reduced to a Level 2 – “Be Set” status up to the boundary with U.S. Forest Service property, near mile post 15.5. Some roadways will remain closed to traffic by Marion County Public Works while trees are removed and damaged culverts and roadways can be repaired:

At Gates Hill Road between North Fork Road and OR 22E, and North Fork Road east of Gates Hill Road, there are n umerous fire damaged trees remain near roadways and properties.  Power has not yet been restored to the North Fork area. Emergency agencies urge residents to remain vigilant and be prepared encounter downed trees on the road.
Watch out for falling rocks and debris in the roadway.
Do not approach downed power lines.
Drive slowly! Be watchful for personnel working in the roadway as road cleanup and utility repairs are still ongoing.
Keep a safe distance from septic tanks and other buried structures that may have been damaged in the fire.
All county parks located within the fire zone are closed.