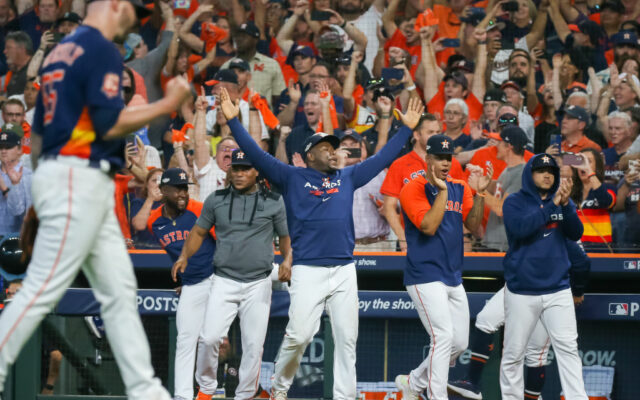 HOUSTON, TX - OCTOBER 13: Houston Astros players celebrate as they win 4-2 in the top of the ninth inning during the MLB ALDS Game 2 between the Seattle Mariners and Houston Astros on October 13, 2022 at Minute Maid Park in Houston, Texas. (Photo by Leslie Plaza Johnson/Icon Sportswire via Getty Images)

(Houston, TX) — The Mariners are trailing 2-0 in their American League Division Series. Seattle fell 4-2 to the Astros in Houston after Yordan Alvarez mashed a go-ahead two-run bomb in the sixth inning. Luis Castillo was charged the loss after allowing three runs over seven frames. The Mariners had led 4-1 through the fifth inning, before the Astros took back the lead for good. The series shifts back to Seattle for Game Three tomorrow afternoon. The Mariners send right-hander George Kirby to the mound, while Houston turns to righty Lance McCullers Jr.