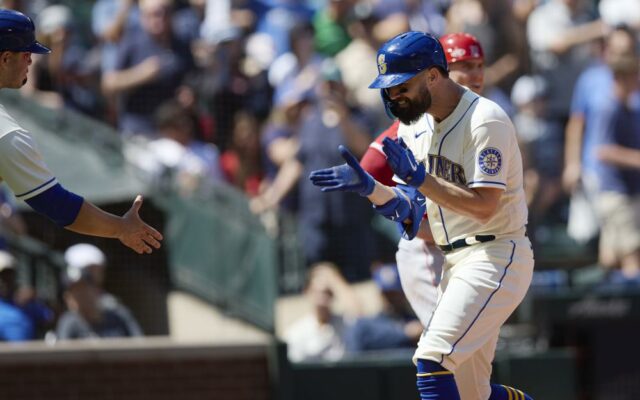 Seattle Mariners' Jesse Winker celebrates as he heads home after hitting a grand slam against the Los Angeles Angels on a pitch from Tucker Davidson during third inning of a baseball game, Sunday, Aug. 7, 2022, in Seattle. (AP Photo/John Froschauer)

SEATTLE (AP) — Jesse Winker hit a grand slam, Marco Gonzales struck out seven and the Seattle Mariners beat the Los Angeles Angels 6-3 on Sunday as Shohei Ohtani received a visit from trainers and continued to struggle.

Winker’s slam – the second of the season for Seattle and Winker’s third career one – put Seattle up 5-1 and helped the Mariners stay in third in the AL wild-card race. Eugenio Suárez added two hits and drove in a run.

“You know, the one thing about Wink is he’s a talker,” Mariners manager Scott Servais said. “He likes to get everybody going and you need the days like today. I talked to him about it a little before the game today: ‘I need your energy today. Go ahead, talk smack, get your teammates fired up,’ and as soon as you give him the key, he takes it and runs with it.”

Two-way sensation Ohtani was visited by trainers before his second at-bat after colliding with Gonzales near the on-deck circle in a collision with Gonzales, but stayed in the game and interim Angels manager Phil Nevin confirmed “he’s OK.”

Gonzales (7-11) also took a comebacker off the foot as he snapped a two-game losing streak. David Fletcher doubled for two runs in the three-hit fourth inning and added another RBI in the sixth to cut Seattle’s lead to 6-3. But Gonzales reached a season-high 91 mph a couple of times after the incidents, giving up a walk and eight hits, to lead Seattle to its second win in three games

“Guys were joking that I need to get beat up before the game apparently,” Gonzales joked. “But I’d vote against that.”

Andrés Muñoz, Penn Murfee and Paul Sewald combined for three scoreless innings of relief as Seattle improved to an AL-best 22-9 in its last 31 games. Sewald earned his 14th save in 17 attempts.

Los Angeles starter Tucker Davidson (1-3), in his first appearance since being acquired from the Atlanta Braves on Tuesday, walked five and struck out one in an uneven start over four innings. He gave up six earned runs and six hits.

“He showed us some flashes of some stuff that we heard about,” Nevin said. “… I can understand being nervous coming to your … first time pitching for a new team, and I think that’ll calm down his next time out.”

Ty France and Mitch Haniger hit consecutive one-out singles in the third inning before Davidson walked Suárez, loading the bases for Winker. The left fielder bent a 2-0 pitch around the right-field foul pole for a 5-1 lead. Sam Haggerty added a run-scoring double in the fifth.

All those hits were clutch, something the Mariners have struggled with all season.

“I try to remind myself that you know the pressure is on” the pitcher, Winker said. “It’s just my job to put a good swing on the ball and obviously those are three clutch at-bats in a time of the game where we needed them. … That was the story of the game for sure.”

Ohtani and Gonzales collided as the pitcher attempted to back up home plate in the third inning on a throw from the outfield. Ohtani drifted toward the field of play while watching events unfold as Gonzales backpedaled into position.

“I felt bad,” Gonzales said. “I crushed his foot and luckily didn’t roll my ankle too bad and was able to keep going.”

Gonzales also got a visit from the trainer and stayed in the game. Ohtani struck out in that at-bat, but appeared to have a bit of a limp after reaching base on a single in the fifth inning.

Ohtani struggled in the four-game series against the Mariners, going 2-for-16 with seven strikeouts.

The Angels claimed OF Steven Duggar on waivers from Texas and designated OF Dillon Thomas for assignment.

Angels: OF Mickey Moniak, a top rookie prospect acquired from the Philadelphia Phillies this week in part of the deal for pitcher Noah Syndergaard, will miss at least eight days after fracturing the tip of his left middle finger in the ninth inning of Saturday’s 7-1 night-cap win over Seattle. Moniak and the team said he also received six stitches after a ninth-inning bunt attempt that went wrong. He’ll be re-evaluated when the stitches are removed in eight to 10 days and could be back in the lineup at that point.

Mariners: CF Julio Rodriguez (right wrist contusion) took batting practice before Sunday’s game with a lighter bat. Servais said he was still a little bit sore but progressing. He’s been out since July 31 and is eligible to return Aug. 10. … Servais said RHP Diego Castillo (right shoulder inflammation) is preparing to make a rehab appearance at Double-A Everett. He also could return as soon as Aug. 10.