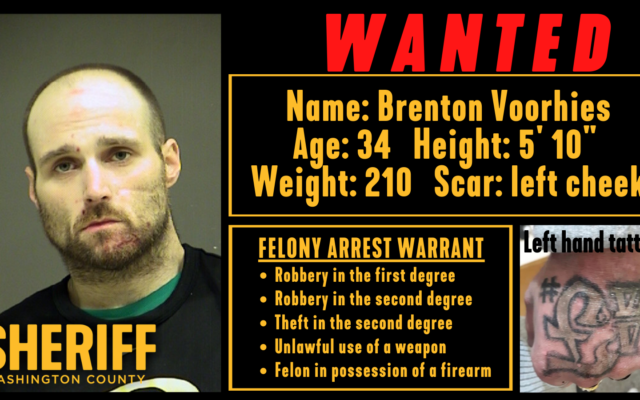 Washington County, Ore. – On Saturday, November 7, 2020, just after 7:30 p.m., Washington County Sheriff’s Office deputies responded to an armed robbery of the Autozone at 825 NW Murray Blvd. in the community of Cedar Mill. Deputies learned one man stole from the store and ran to a truck waiting outside. The driver of the truck pulled out a gun and confronted a store employee. Both men then fled in the truck.

Detectives from the Violent Crimes Unit investigated the case and identified 24-year-old Brian Hauth as the man who stole from the store. Mr. Hauth was arrested on November 15 and is currently being held in the Washington County Jail on $250,000 bail for the following charges:

Detectives identified 34-year-old Brenton Voorhies, of Hillsboro, as the man driving the truck. On November 23, a Washington County grand jury issued an indictment charging both Mr. Hauth and Mr. Voorhies with the above-listed crimes. However, Mr. Voorhies’ current location is unknown, and he has an active felony arrest warrant. He is 5’10” tall, weighs about 210 pounds, and has a distinctive scar across his left cheek. He also has a unique tattoo on the top of his left hand.